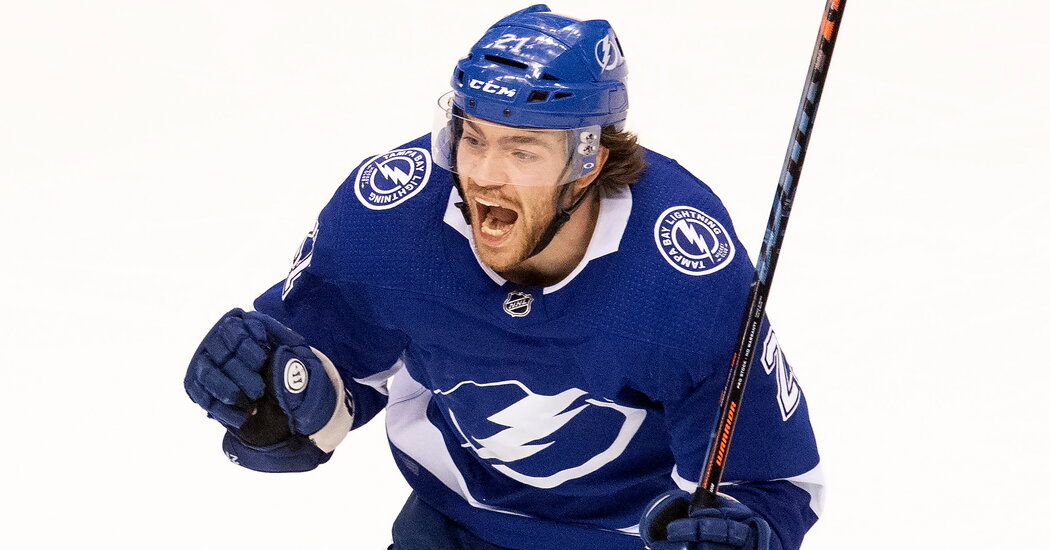 TORONTO — The puck dropped at 3 p.m. Eastern time and the playoff game between the Tampa Bay Lightning and Columbus Blue Jackets went on for more than six hours, finally coming to an end at 9:22 p.m., with Tampa Bay winning, 3-2, in the fifth overtime period.

The game went on so long that the Boston Bruins’ opening-round playoff game against the Carolina Hurricanes, which had been scheduled to begin at 8 p.m., was pushed to Wednesday morning.

At one point, in the fourth overtime, the scoreboard high above Scotiabank Arena put up a reminder to its spectator-less stands, “It’s time for the 7th period stretch.” Later, at the end of that period, the Lionel Richie song “All Night Long” blared over the speakers.

This was a hockey marathon of the strangest proportions in perhaps the strangest year in N.H.L. history, with a pandemic forcing the league to play without fans in the building in the two playoff hub cities of Edmonton and Toronto.

Too bad. Historic games don’t happen very often. They are made for fans in the stands, who can look back some day and tell family they were there. But instead of the building vibrating with crowd noise, it was eerily quiet, except for the thwack of sticks and the speakers piping in a low hum of crowd noise to add some suspense and fake realism.

Players jostled frequently as the tension in the game built. Between periods, as the action drifted into a fifth overtime period, players drank water and Gatorade, consumed gel packets, and ate power bars and bananas to preserve energy and stave off cramping.

The players hadn’t eaten since breakfast, and after the fourth overtime period, Lightning Coach Jon Cooper looked over at his salmon salad in the coaches’ room and wanted to devour it. “But I thought that was going to, I don’t know, break up the karma,” he said. “So I stayed hungry.”

Finally, Tampa Bay’s Brayden Point ended the suspense with the game-winning goal. It was his second goal of the night.

The Lightning now have a 1-0 lead in the best-of-seven opening-round Eastern Conference series and took a big step toward avenging last year’s opening-round ouster. The Blue Jackets swept the top-seeded Lightning out of the 2019 N.H.L. playoffs, before losing to the Bruins in the second round.

It was the fourth-longest game in league history, with 150:27 of total playing time, falling just shy of the tally for Game 1 of the 1936 semifinals between the Detroit Red Wings and Montreal Maroons (176:30).

Columbus goalie Joonas Korpisalo set a modern-day record with 85 saves, which eclipsed the 73-save mark set by Islanders goalie Kelly Hrudey in Game 7 of the 1987 division semifinals. Lightning goalie Andrei Vasilevskiy was almost a forgotten star: He made 61 saves, good for a franchise record.

Columbus defenseman Seth Jones was the workhorse on the night, logging 65:06 of ice time, the league’s highest single-game total by a skater since 1997-98.

The end of the game felt like the finale of a season of “Survivor,” the reality TV competition.

There were chances at both ends and scoring attempts that ended in desperation. Defenders sprawled on the ice and got sticks in the way to end the threats. The goalies did the rest.

Lightning forward Yanni Gourde had tied the game, 2-2, in the third period to force overtime. He called the team’s emotion “special” when Point ended the game.

“I mean at that point we were all exhausted,” he said.

Columbus players, for their part, put on brave faces in defeat.

Jones, asked about playing for more than 65 minutes, said: “I feel fine. We’ll take care of our bodies tomorrow and prepare for Game 2.”

That rematch is set for Thursday afternoon. With no travel between games, the players will take advantage of a chance to rest.

Dizzying Amounts of Money Pour Into the Biden and Trump Campaigns

With President in the Hospital, a V.P. Debate Takes On Outsize Import