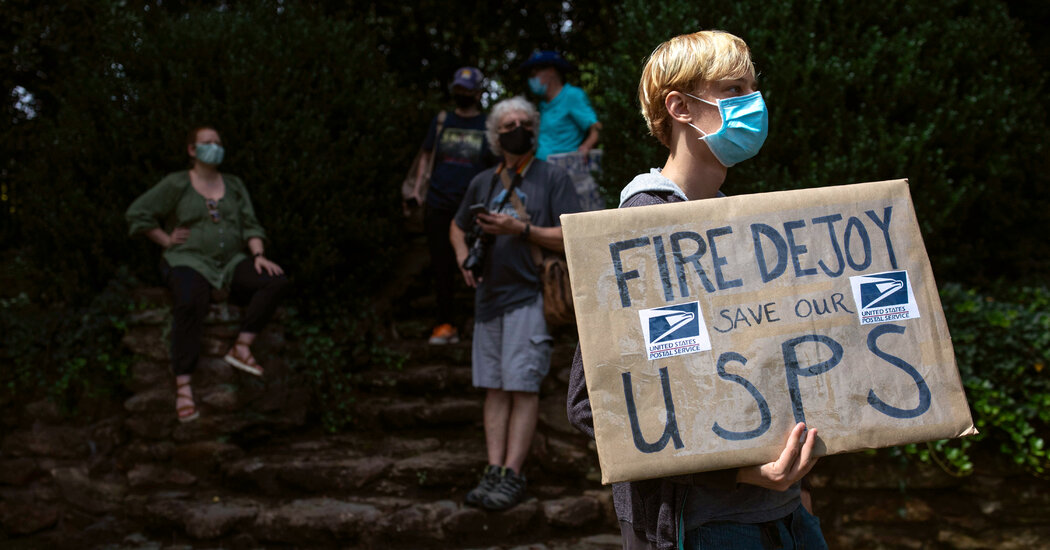 Mail-in voters from six states filed a lawsuit Monday against President Trump and Louis DeJoy, the postmaster general, seeking to block cuts to the Postal Service ahead of the November election.

The suit, filed in Federal District Court in Manhattan on behalf of 17 plaintiffs from California, Pennsylvania, Illinois, New Jersey, Wisconsin and New York, asks the court to declare that Mr. Trump and Mr. DeJoy have violated voters’ rights by cutting the Postal Service in an effort to stymie mail-in voting.

The suit asks the court to order the administration to take “all steps necessary and sufficient to ensure that the U.S.P.S. is adequately funded” and ensure “absentee and other mail ballots are treated equal to in-person ballots” and fund “sufficient staffing and overtime to handle a record level of mail voting.”

A spokesman for the Postal Service declined to comment specifically on the lawsuit on Monday, but pointed to Mr. DeJoy’s recent remarks denying any plot to slow down election mail.

The suit builds off growing concern from postal workers and voters about Mr. DeJoy’s actions ahead of the election.

In June, union officials received a notice that Postal Service management was removing 671 machines used to sort mail quickly because of a “reduction to letter and flat mail volume.” In July, the service sent employees a memo banning additional daily trips beyond their initial runs in an effort to save some $200 million.

Among the plaintiffs are: Mondaire Jones, a lawyer and the Democratic nominee for New York’s 17th Congressional District seat; Alessandra Biaggi, a Democratic New York state senator; Shannon Spencer, a member of the Borough Council in Collegeville, Pa.; and Mary Winston Green, a 97-year-old from Cook County, Ill.

The plaintiffs in the suit are represented by J. Remy Green and Ali Najmi, who recently persuaded a federal judge in Manhattan that thousands of absentee ballots missing postmarks in New York State must be counted.

10 Ways to Make Extra Money as a Graphic Designer