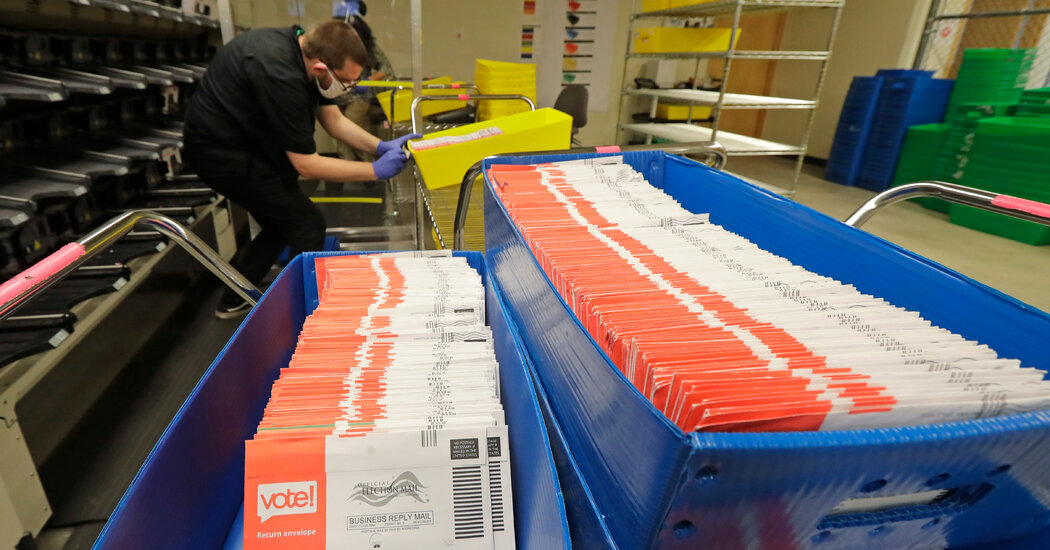 President Trump’s relationship with voting by mail is full of contradictions. The president himself votes by mail, as do at least 16 members of his inner circle. But he has repeatedly pushed false arguments about the practice, which he has claimed will lead to “the greatest rigged election in history.”

That could explain why his campaign has spent $200,000 on Facebook ads since May disparaging voting by mail, with baseless accusations of Democrats “stuffing the ballot boxes with fake and fraudulent votes” — and has also pumped $650,000 into Facebook ads over the past week encouraging his supporters to request absentee ballots.

“President Trump needs you to request your ballot,” say dozens of new ads that began running last week. “This is the Election of our LIFETIME.”

The seemingly divergent messaging in Mr. Trump’s digital apparatus underscores the threat he may be posing to his own campaign: As he attacks mail-in voting, he could also be hampering his own supporters’ enthusiasm for embracing the method, which will be critical for voters who want to avoid going to the polls on Election Day because of the coronavirus pandemic.

A gap in mail-in ballot requests between Republicans and Democrats could be important in November. And so, while the president has continued to rail against the practice, the Trump campaign has concurrently maintained an ad presence boosting mail-in voting for months. The campaign has run roughly 3,800 ads on Facebook since 2018 telling its supporters to “request your ballot,” according to Facebook’s ad database.

By running ads on Facebook, the Trump campaign can target its message in favor of absentee voting more directly to its own supporters, without drawing as much public attention as a campaign speech or television ad might.

Critics say Mr. Trump is trying to undermine voting by mail in part because he wants to sow doubt about the election and lay the groundwork for questioning the outcome should he lose.

The Trump campaign said Tuesday that the president opposed “universal mail-in voting systems,” in which states automatically mail ballots to all voters, but supported “traditional absentee vote-by-mail systems,” in which voters must proactively request ballots themselves.

But while broader mail-in voting has led to delayed results in some states this year, and some voters have had their ballots rejected, often because they were not postmarked in time, there has been no evidence of widespread fraud or criminal malfeasance. Cases of fraud have been exceptionally rare in states that have conducted elections primarily by mail for years.

Voting in a Covid Pandemic: Wear a Mask and Bring Your Own Pens

Ryan Zimmerman and 2 Others Opt Out of M.L.B. Season