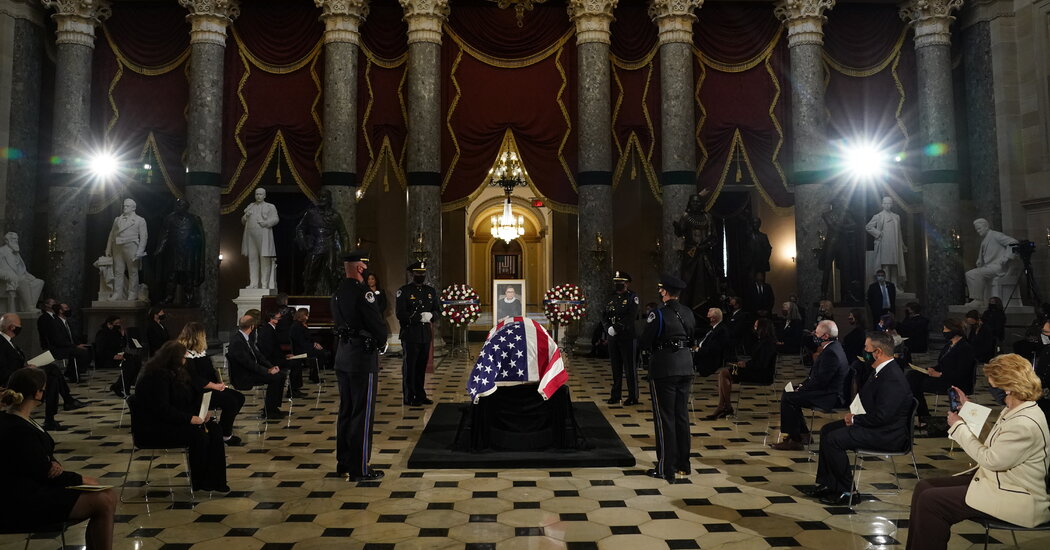 Justice Ruth Bader Ginsburg broke one final barrier on Friday, becoming the first woman and the first Jewish American to lie in state in the United States Capitol.

The honor, arranged by Speaker Nancy Pelosi, and a private ceremony at the Capitol, bring to a close a week of public memorials for Justice Ginsburg, the liberal Supreme Court jurist and trailblazer who died last Friday at 87. Her family plans to hold a private burial next week at Arlington National Cemetery.

Like the memorial at the court on Wednesday, the honors Friday at the Capitol were brief and mostly limited to family and a small contingent of lawmakers.

Asked by a reporter if Justice Ginsburg had helped clear a path for her own success, Ms. Harris said “absolutely.”

Justice Ginsburg “made America see what leadership looks like,” Ms. Harris said. “She broke so many barriers and I know that she did it intentionally knowing that people like me could follow.”

Only about 30 Americans have received the honor of lying in state at the Capitol: presidents, military leaders and members of Congress, all of them men. Rosa Parks, the civil rights icon, is the only other woman granted a similar honor, but as a private citizen, she lay “in honor.”

On Thursday, President Trump was jeered by protesters as he paid his respects to Justice Ginsburg, standing silently by her coffin at the top of the Supreme Court steps as a vigorous chant of “Vote him out!” erupted on the street below.

As Justice Ginsburg’s legacy was celebrated at the Capitol, White House officials and Senate Republicans busied themselves on Friday with preparations of their own to usher in a conservative successor to the Supreme Court with remarkable speed.

Basketball’s Getting Close. But the Hoops Talk Will Have to Wait.

Lil Marlo, a Rising Atlanta Rapper, Is Shot and Killed at 30