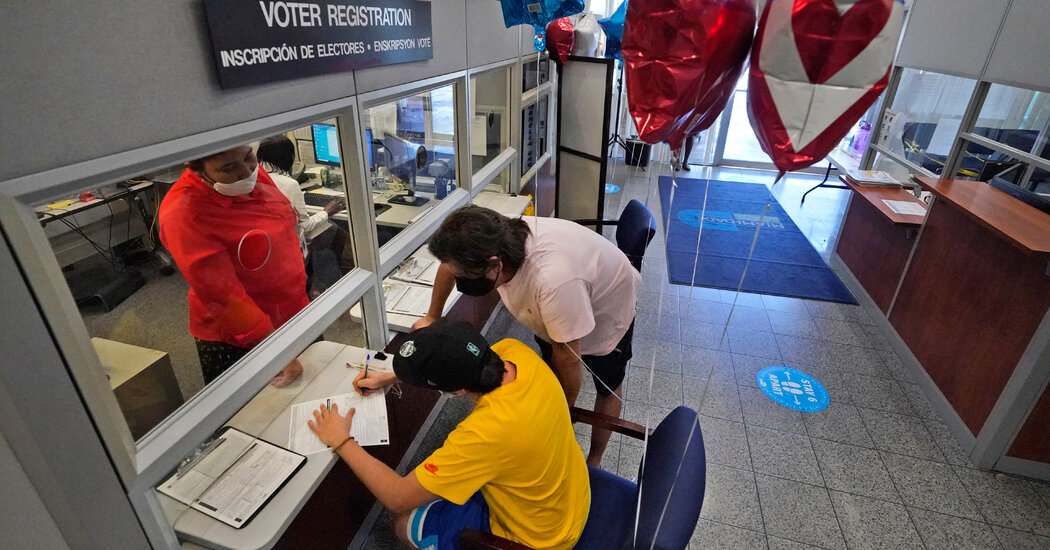 MIAMI — Even though the crash of Florida’s voter registration website in the hours before Monday night’s deadline may have prevented thousands of new voters from signing up, a federal judge declined on Friday to order the state to reopen registration to make up for lost time.

But he concluded that extending the deadline would overwhelm county elections supervisors with the vote already underway, pointing to the state’s notorious elections history.

“Notwithstanding the fact that cinemas across the country remain closed, somehow, I feel like I’ve seen this movie before,” Judge Walker’s 29-page ruling began. “Just shy of a month from Election Day, with the earliest mail-in ballots beginning to be counted, Florida has done it again.”

Judge Walker, who was appointed by President Barack Obama, harshly criticized the state for “hastily” implementing what he called a “half measure”: announcing, at noon on Tuesday, that the deadline would be extended only until 7 p.m. that day.

“This left less than seven hours for potential voters to somehow become aware of the news and ensure that they properly submitted their voter-registration applications, all while also participating in their normal workday, school, family and caregiving responsibilities,” the judge wrote.

The website crashed Monday evening after 49,000 unique users tried to register, creating a bottleneck that gave them error messages. The users then hit refresh over and over, leading to more than a million requests, which overwhelmed the system.

Judge Walker compared new registrations with figures from 2018 and found that the combined totals from Monday and Tuesday were about 21,000 submissions short of what would have been expected if the website had not experienced technical problems.

Several voter-rights groups had argued that the extension was too short for people to be properly notified. “Confidence in the election requires that people who are eligible and follow the rules be able to vote,” Stuart C. Naifeh, a lawyer for the plaintiffs, said during the hearing.

But in the end, Judge Walker wrote that he worried about causing chaos. Two county elections supervisors submitted declarations on behalf of the state saying that another extension could be problematic.

“Another extension under the circumstances will serve to reinforce the confusion and mistrust voters have surrounding this election, further strengthening the rampant misinformation and disinformation campaigns that are already undermining the November general election,” wrote Mark Earley, the supervisor in Leon County.

The voting-rights groups said in a statement Friday morning, “Sadly, this is another episode in Florida’s long history of voter suppression.”

Can a Physically Taxing Job Be Bad for Our Brains?