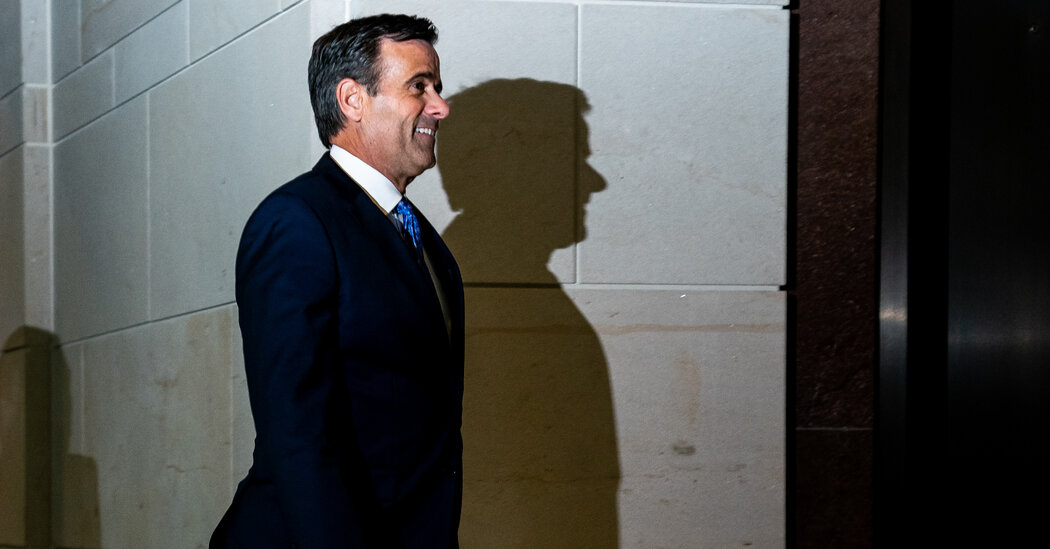 WASHINGTON — During his confirmation hearing in May to oversee the nation’s spy agencies, John Ratcliffe, then a lawmaker from Texas, promised senators skeptical of his vocal support for President Trump that he would be “entirely apolitical as the director of national intelligence.”

A few months into his tenure, Mr. Ratcliffe has emerged as anything but. He has approved selective declassifications of intelligence that aim to score political points, left Democratic lawmakers out of briefings, accused congressional opponents of leaks, offered Republican operatives top spots in his headquarters and made public assertions that contradicted professional intelligence assessments.

None of the moves have dismayed his critics, or intelligence officials inside the C.I.A. and the National Security Agency, as much as Mr. Ratcliffe’s decision to release unverified intelligence last week that mentioned Hillary Clinton. Intelligence professionals said the material could be Russian disinformation, but even if its substance — that Russian intelligence had information that Mrs. Clinton’s 2016 campaign planned to tie Mr. Trump to the Kremlin’s election hacks — were true, it hardly demonstrated anything nefarious about her.

No matter. Republicans claimed it showed Mrs. Clinton was part of a “deep state” plot to undermine the president by investigating his campaign’s ties to Russia, and Mr. Trump made a glancing reference to the unverified intelligence in the first presidential debate.

Gina Haspel, the director of the C.I.A., opposed the declassifications, saying that the release of the unverified raw material could jeopardize spies’ ability to gather intelligence and endanger their sources, according to two people familiar with the matter. But Mr. Ratcliffe, who has the authority to release intelligence, and Mark Meadows, the White House chief of staff, favored the move, the people said.

Mr. Ratcliffe’s tenure is the latest example of how the Trump presidency has thrust the intelligence community into a charged political role, much of it stemming from Mr. Trump’s enmity toward intelligence and law enforcement scrutiny of his 2016 campaign’s ties to Russia.

“We have never seen a senior intelligence official so politicized as Ratcliffe,” said Marc Polymeropoulos, the former head of the C.I.A.’s clandestine operations in Europe and Russia. “When the head of the C.I.A. pleads to not disclose information, it is extraordinary that he wanted to push forward.”

Amid the renewed push for more disclosures, Mr. Ratcliffe is preparing to release more material, according to three current and former American officials. The releases so far have been aimed at discrediting the Obama administration and trying to undercut the intelligence community assessment that showed Russia favored Mr. Trump and worked to help him get elected in 2016.

The president has long taken issue with that finding, released by the intelligence agencies in the final days of the Obama administration. His allies, led by Representative Devin Nunes of California, the top Republican on the House Intelligence Committee, have long sought to declassify intelligence that they believe undercuts the finding.

Mr. Trump has made the disclosures a priority as the election nears. He claimed on Thursday that last year he had declassified “everything” related to the Russia investigation, then railed against unnamed officials impeding the release of the information. “There’s not a document they can’t have, but it’s still not that easy,” Mr. Trump told Fox Business Network. “You have a ‘deep state’; you have a group of people that don’t want to have documents shown.”

Some Republicans blamed Ms. Haspel. Senators Ron Johnson of Wisconsin and Charles E. Grassley of Iowa wrote to her in a letter released on Wednesday that they were “increasingly disappointed” that she had failed to provide them with documents they wanted about the F.B.I.’s 2016 investigation into Russia’s ties to the Trump campaign.

Mr. Ratcliffe, with little warning to the C.I.A., released more material this week, prompting a torrent of complaints from Mr. Trump on Twitter about the Russia investigation and calls for even more releases.

Some of the additional intelligence Mr. Trump, Mr. Nunes and Mr. Ratcliffe want to disclose is contained in secret documents based on the House Republicans’ 2018 report on Russia’s election interference campaign, according to current and former officials.

The report, dismissed by Democrats as distorted, criticized the tradecraft of the intelligence community and said Russia’s goals in 2016 were simply to “sow chaos and discord,” not to favor Mr. Trump. It also raised questions about that intelligence conclusion.

The secret documents contain Republican allegations of wrongdoing by senior officials in the Obama administration, according to a person familiar with the documents. They also have sensitive material about intelligence sources that the C.I.A. relied on to investigate Russia’s interference campaign, as well as material from the F.B.I. and the National Security Agency, according to two other people familiar with the outlines of the documents. Republicans believe the information backs their criticism of the handling of the Russia investigation by the C.I.A. and the F.B.I.

The information is so sensitive that Republicans on the House Intelligence Committee keep the documents in a lockbox in a vault in C.I.A. headquarters in Langley, Va. — prompting some intelligence officials to call the lockbox a turducken. Others likened it to a bank safe deposit box.

Mr. Ratcliffe visited Langley at least once, in August, to open the lockbox and read the Republican documents, according to three people familiar with his visit.

He most likely already had a road map to its contents. A number of Republican veterans of the Intelligence Committee staff now work in senior jobs in his office and on the National Security Council staff. Some would have been certain to know at least the broad outlines of the documents.

And Mr. Ratcliffe wrote in June to the committee to announce that he was doing a declassification review and seeking an unredacted copy of the 2018 report. In a letter 10 days later acquiescing to the request, Representative Adam B. Schiff, Democrat of California and the panel’s chairman, cautioned that the Republican report “sought to whitewash” Russia’s election interference and warned Mr. Ratcliffe against resuscitating “this misleading attack.”

Weeks later, in early August, Mr. Ratcliffe’s office sought, and received, permission from the committee to read the secret documents and annexes related to the report and stored at the C.I.A., said a person briefed on the request.

The Democrats on the House committee would most likely object to the release of all or part of the documents, leaving Mr. Ratcliffe the option instead of declassifying the underlying intelligence.

Mr. Ratcliffe, current and former intelligence officials said, endangers the agencies’ intelligence collection network with his aggressive declassifications by risking the exposure of C.I.A. sources and National Security Agency methods of intelligence gathering. A memo he declassified on Tuesday, for example, could give Russian intelligence important clues about how the C.I.A. gathered information in 2016, according to two people familiar with the intelligence.

Presidents and their senior officials rely on intelligence to make decisions about sending troops into battle, dismantling terrorist plots and other national security issues. It is supposed to be based on facts, and intelligence professionals believe that if politics color their assessments, they are less reliable.

“He is doing exactly what the administration brought him in to do as D.N.I.,” said Joseph Maguire, whom Mr. Trump dismissed as acting director of national intelligence in February.

Releasing raw intelligence also hurts Republicans’ case and gives the appearance of partisanship, said Dan Hoffman, a former C.I.A. officer and Fox News commentator. The material declassified by Mr. Ratcliffe last week was a “single thread” of an intelligence report, rather than a complete, verified analysis, he said.

“The most professional analysis is based on all source intelligence,” Mr. Hoffman said. “The D.N.I. should know the release of raw reporting without context runs the risk of giving ammunition to those who argue he is politicizing his office.”

Trump administration officials said the declassifications were meant to demonstrate the partisanship of the Obama administration as officials began investigating Mr. Trump and his campaign. They have accused former senior intelligence officials, like the former C.I.A. director John O. Brennan, of confirmation bias, reading the worst into the information they gathered and casting aside evidence that complicated their view.

Mr. Trump and his allies also believe the material shows a double standard of more scrutiny applied to the Trump campaign’s ties to Russia than to material and intelligence that involved the Clinton campaign.

But the evidence has made plain how Russia conducted extensive election sabotage operations that supported Mr. Trump and that his advisers welcomed the effort, Mr. Polymeropoulos said. “It is so blatantly obvious what occurred,” he said.

Though the C.I.A. and the National Security Agency have already objected to Mr. Ratcliffe’s declassifications and would almost certainly try to block further releases, Mr. Trump has also given Attorney General William P. Barr the authority to declassify intelligence agencies’ secrets as part of the Justice Department investigation into the origin of the Russia inquiry.

Some former and current officials expressed concern that Republicans might try to undermine the C.I.A.’s key sources, pointing to the recent release of information meant to discredit an F.B.I. informant who played a central role in compiling a dossier on Mr. Trump’s ties to Russia. Among the secrets that some former officials believe could be declassified involve a critical C.I.A. informant who helped shore up the conclusion that Mr. Putin favored Mr. Trump’s election.

If he were to declassify that information, Mr. Ratcliffe could be seeking to highlight counterintelligence concerns about the informant, who was resettled to the United States after agency officials became concerned about his safety. When his name was revealed publicly last year, the C.I.A. had to move him a second time.

‘I Just Don’t Get It’: Republicans Balk at Funding F.B.I. Building in Virus Bill

Letting Your Insurer Ride Shotgun, for a Discounted Rate

‘Nothing About Us Without Us’: 16 Moments in the Fight for Disability Rights