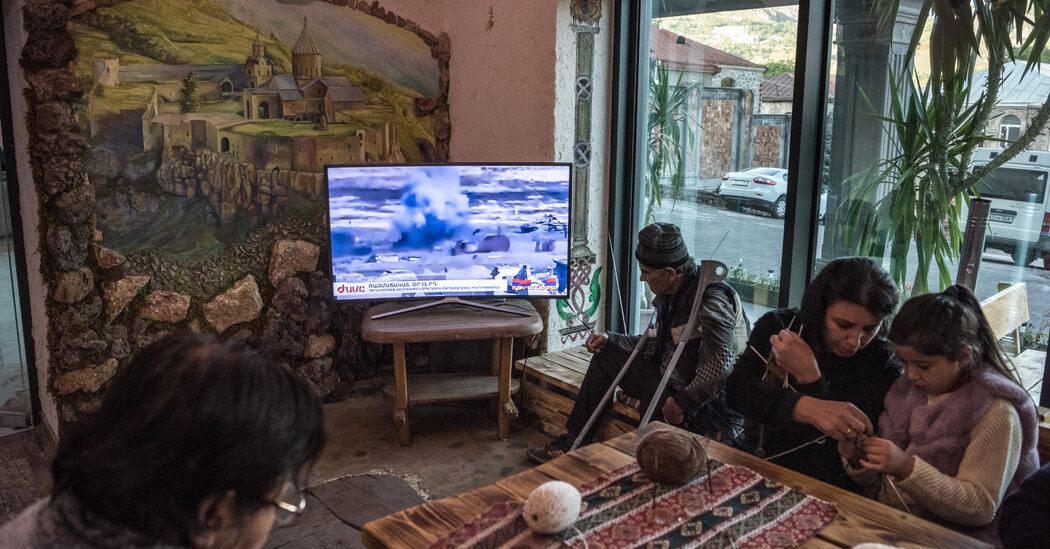 GORIS, Armenia — Fierce fighting over a breakaway Armenian enclave in Azerbaijan subsided on Saturday after a cease-fire took effect. But there was little expectation of a durable peace two weeks into the most violent conflict that the volatile region has seen in decades.

The cease-fire agreement, reached by Armenia and Azerbaijan in Moscow early Saturday after 10 hours of overnight talks, raised hopes of at least a brief respite in the artillery bombardment, drone strikes and trench warfare that have killed hundreds since Azerbaijan launched an offensive on Sept. 27.

Each side accused the other of mounting new attacks after the cease-fire took effect at noon on Saturday. But there were fewer reports of shelling of the enclave’s capital, Stepanakert, than in previous days. The Armenian Defense Ministry said that most of the front line was “relatively calm.”

The International Committee of the Red Cross said it stood ready to use the lull to retrieve the remains of the dead at the front line, where the ethnic Armenian enclave of Nagorno-Karabakh borders Azerbaijani-controlled territory.

The enclave is part of Azerbaijan under international law, but has been controlled by a breakaway government closely aligned with Armenia since a yearslong war over the territory in the early 1990s.

About 20,000 people were killed, and more than a million, mostly Azerbaijanis, were displaced in that war. Azerbaijan says it is now fighting to reclaim land that rightfully belongs to the country, while Armenia says ceding the land to Azerbaijan would mean a new round of ethnic cleansing in Nagorno-Karabakh.

Neither side now appears in a mood to compromise, with rhetoric from all parties having grown harsher in recent months.

“This war did not surprise anyone here,” said Zaur Shiriyev, an analyst with the International Crisis Group based in the Azerbaijani capital, Baku. “No one actually questions why it’s happening now.”

Mr. Shiriyev said he did not expect the cease-fire to hold for long, in part because the agreement announced in Moscow early Saturday morning contained no specifics on geography or timing.

“It can be declared inoperative at any time,” he said.

Azerbaijan, backed by its increasingly assertive ally, Turkey, insists Armenia must withdraw its troops from Nagorno-Karabakh if it wants peace. The foreign minister of Azerbaijan, Jeyhun Bayramov, warned Saturday that his country was prepared to continue fighting.

He’s 83, She’s 84, and They Model Other People’s Forgotten Laundry