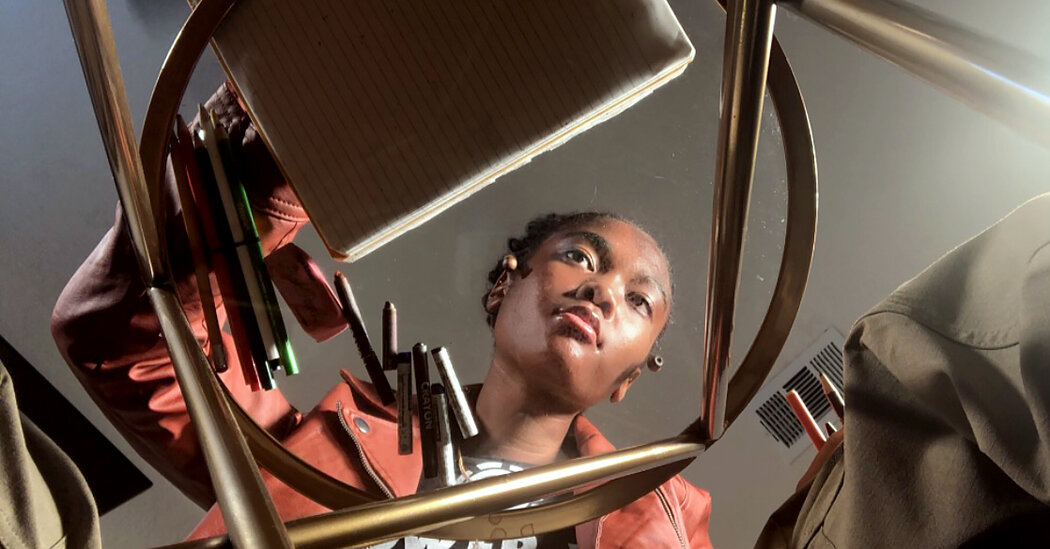 Times Insider explains who we are and what we do, and delivers behind-the-scenes insights into how our journalism comes together.

Samuel Getachew, 17, believes poetry can be a catalyst for change and can help people understand one another. A spoken word poet and Oakland’s 2019 Youth Poet Laureate, he wrote “justice for — ” which reflected his emotions about America’s unrest. In the first half of the work, he wrote:

i tried to write a poem for george. / and breonna. / and tony. / and elijah. and none of them made it past a scribble / past a draft / past the passing thought / that i could leave the name and the details blank / and this would be the same poem / that i’ve been writing since i was 14 years old / and i am so tired / of explaining why i’m tired

Audre Lorde, the poet laureate of New York State in 1991, once said, “Poetry is the way we help give name to the nameless so it can be thought.” Mr. Getachew and several other young Black poets across the country are lending their voices to those who may not feel heard and are amplifying emotions within their communities, while also finding coping mechanisms through creativity.

The Times special project Young Black Poets, which published online Friday and features Mr. Getachew and nine others, focuses on the works of poets ages 12 to 19 and shows how a new generation is responding to the current climate in America. The project, which includes interviews and recordings of the poets reading their works, is a collaboration among the Culture desk, the Special Sections desk and the Surfacing team, which specializes in major visual projects.

The effort began early this summer. Jaspal Riyait, the art director who played a significant role in choosing the poets, credits the photo editor Sandra Stevenson and her son, now 20, as driving forces behind the idea. The Times colleagues spent time discussing the ways in which Ms. Stevenson’s son was coping through art. That led the teams to ponder how young people nationwide were dealing with current events, especially the social justice uprising.

“If you’re a young adult, this is the first time in your life where you’re seeing this collective response on this national level,” Ms. Riyait said. “We started looking at a very particular time when young minds are molding and forming and not being influenced but being an influencer. And I think that was really important.”

Realizing that poetry was one of the main avenues of expression for young people, the team reached out to arts organizations around the country like UrbArts in St. Louis, and viewed events held by groups like Young Chicago Authors.

Starting in June, Ms. Riyait and the team did more research online, looking at the various poet laureates across the country, spending time reading their poems and watching their videos. “It was a very deep enjoyable rabbit hole.” she said.

Many of the selected poets participated in local youth poetry organizations, performed nationally, produced elaborate videos of their work and competed at various festivals.

As part of the project, I interviewed all 10 poets about their writing process, their inspiration and why poetry matters now.

Inari Williams, 18, who is also a rapper, said some of his inspiration came from talking with people less fortunate than others. “The homeless population in Chicago is very large, and sometimes I run into homeless people and they just want to be heard,” he said. “I try to give them a voice through my art.”

Many of them expressed to me that they felt they had a responsibility to their communities to speak about the issues and injustices of those around them. They submitted poems for the project that focus on the Black Lives Matter movement, women’s rights, L.G.B.T.Q. rights, what it means to be Black in America, police brutality, gun violence, the pandemic and self-care.

Leila Mottley, 18, of Oakland, Calif., who recently landed a book deal with Knopf, said, “I’m often contemplating girlhood and Black girlhood and what it means to attempt to find joy and family and community in situations that call for basic survival.”

When I asked William Lohier, 19, of Brooklyn, why he thought poetry matters in this moment, he said that poetry had mattered in every moment and that the issues that he and others have confronted this year were the issues that every Black poet he knows has been thinking about since they started writing poetry.

“I see poetry ultimately,” he said, “as a tool for Black liberation.”

Obama Urges Democrats: ‘Whatever You’ve Done So Far Is Not Enough’