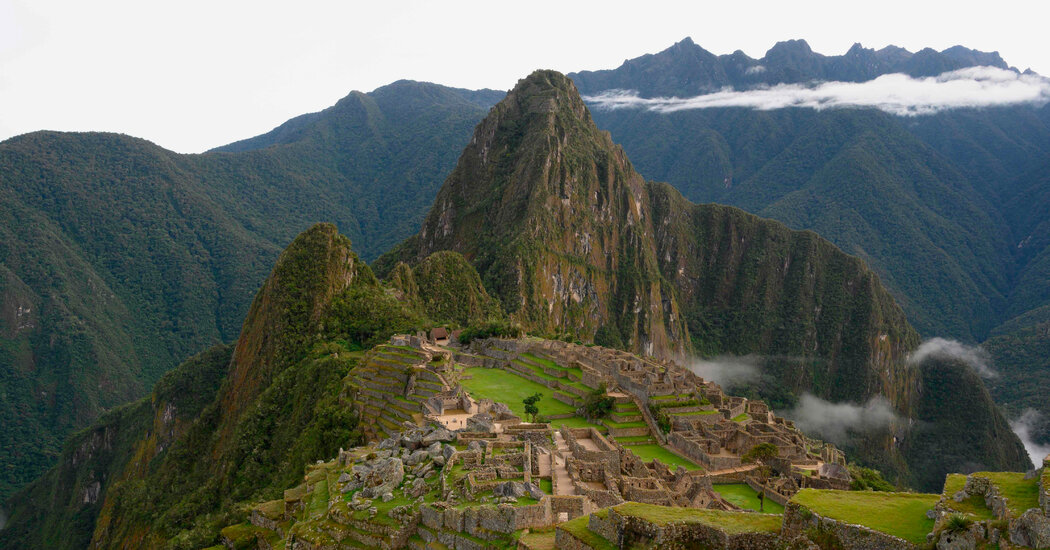 Jesse Katayama had planned to end a two-year journey around the world 8,000 feet above sea level at Machu Picchu, the sprawling 15th-century Inca citadel high in the Andes Mountains.

Then the coronavirus happened, stranding Mr. Katayama, a 26-year-old Japanese citizen, in Peru and shutting down tourism sites as a lockdown was imposed across the country.

On Sunday, after a wait of seven months, Mr. Katayama finally got to visit the UNESCO world heritage site. And aside from a few guides, he got it all to himself.

“After the lockdown, the first man to visit Machu Picchu is meeeeeee,” he wrote in a post on Instagram that included photos of him with a park representative.

Alejandro Neyra, Peru’s culture minister, said in a virtual news conference on Monday that Mr. Katayama had been granted special access to the site in recognition of his patience.

“He had come to Peru with the dream of being able to enter,” Mr. Neyra said. “The Japanese citizen has entered together with our head of the park so that he can do this before returning to his country.”

Before the pandemic, Machu Picchu welcomed thousands of visitors a day. Tourists typically have to apply months in advance for permits to enter an Inca trail that leads to the ancient fortress.

Mr. Katayama’s original pass was scheduled for March 16, and he arrived two days before, at Aguas Calientes, a town at the foot of the mountain.

But two days turned into weeks and then months. He rented a small apartment in the town and passed the time taking daily yoga classes, teaching local children how to box, and studying for various fitness and sports nutrition certification exams.

He wrote on a crowdfunding website two years ago that he dreamed of opening a boxing gym in Japan and wanted to travel the world to learn the best approaches from each country. Before reaching Peru, he taught boxing in Australia, Brazil, South Africa, Egypt and Kenya.

Mr. Katayama told a Japanese news outlet that he had considered joining the emergency evacuation flights organized by Japan’s government in the spring, but found them too expensive. He ultimately decided to stay, postponing his departure in the hopes that Machu Picchu would soon reopen.

His patience paid off in the end, and he became a bit of a local celebrity last week when La República, a major Peruvian broadsheet, covered his vigil and called him “the last tourist in Machu Picchu.”

“I stayed with the sole purpose of getting to know this wonder and I didn’t want to leave without doing so,” he told the newspaper in a separate interview.

News of his persistence had resulted in hundreds of well-wishers offering to petition the authorities on his behalf, he said on Instagram.

Mr. Neyra, the culture minister, said that the authorities had received a visitor application for Mr. Katayama and decided to grant him special access before his return to Japan.

The pandemic has devastated Peru’s tourism industry, the country’s third largest generator of income. The industry employs more than 1.3 million workers, or nearly 8 percent of the country’s work force, the Lima Chamber of Commerce said in 2018. When travel stopped, most of those jobs were lost.

Peru has also reported an increasing number of coronavirus cases, and more than 33,000 deaths.

Mr. Neyras said that seven archaeological sites in Cusco, a city in the Andes, would reopen to small groups at 30 percent capacity on Thursday. A reopening date for Machu Picchu has yet to be announced.

Where the Virus Is Less Bad

The California G.O.P. admits it placed misleading ballot boxes around the state.

Where the Virus Is Less Bad