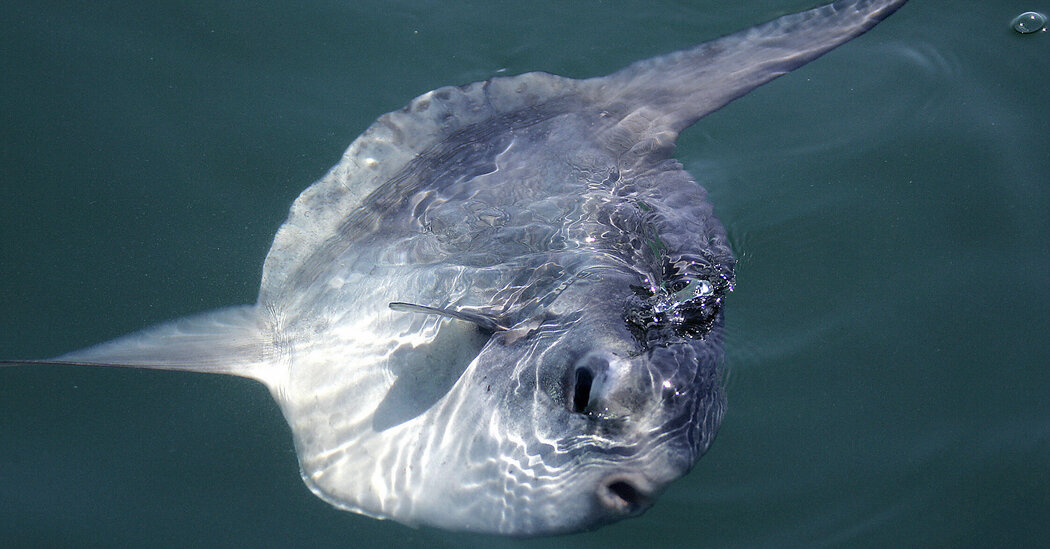 Some of the calls reported an injured seal. Others said they had seen a shark. Still others implored officials to help what appeared to be a stranded fish.

By early afternoon on Monday, dozens of people had called emergency officials in Wareham, on the southeast coast of Massachusetts. The town’s Department of Natural Resources dispatched two officers to investigate.

They soon discovered that the odd-looking creature lolling in a cove off Buzzards Bay was no cause for alarm. It was an ocean sunfish, an enormous, blob-like creature that eats jellyfish and has a dorsal fin that, to the untrained eye, can resemble that of a shark.

The calls about it had become so voluminous, however, that the Wareham Department of Natural Resources was compelled to issue a plea on Facebook. The fish was swimming, it said, adding: “It is not stranded or suffering. The sunfish is FINE.”

It added, “PLEASE STOP CALLING THE POLICE DEPARTMENT ABOUT THIS SUNFISH!!”

Garry Buckminster, the department’s director and Wareham’s harbormaster, said he began getting calls from concerned residents as early as 6:30 a.m. on Monday.

“When you see them coming along, it looks like this massive fin coming out of the water,” he said of the sunfish.

“We get it,” he added, referring to the concern residents had expressed. “But 911 isn’t a good avenue to report fish that are swimming around.”

Swimming in parts of New England has become an unsettling experience in recent years, particularly around Cape Cod, where great white sharks have increasingly become prevalent in recent years, coming into closer contact with swimmers.

In Wareham, a town of about 22,000 near the Cape, officials have occasionally warned residents to be aware of potential shark activity.

So it was not surprising that the appearance of the peaceful sunfish once again confused residents, marine specialists said.

Mr. Buckminster recalled one summer more than 20 years ago when the dorsal fin of a sunfish terrified swimmers at Onset Beach.

“Everyone went running out of the water,” he said, “and it was just this big goofy fish.”

Sunfish move by oscillating their dorsal fins at the water’s surface, an odd-looking way of swimming that can sometimes make it appear as if they are hurt.

In 2015, the fish famously confused two men who filmed the creature as they toured Boston Harbor in a boat.

“That’s a tuna, bro!” one of them exclaimed in a profanity-laced video that was widely circulated online.

Ocean sunfish, the heaviest bony fish in the ocean, are often described as slow, clumsy swimmers, but that is an unfair characterization, said Carol Carson, founder of the New England Coastal Wildlife Alliance, a conservation group that has rescued sunfish that became stranded in Massachusetts coves and inlets during their migration south.

“These are powerful fish,” said Ms. Carson, a whale biologist who is known as Krill. “They can dive over 2,500 feet.”

They are also extremely curious, she said.

Chris Whitton, owner of the Neat Lady Fishing Company, which operates fishing boats in Buzzards Bay, said it was not unusual for sunfish to swim right up to his boats.

“I’ve had them come right up to the side of the boat, and they lift one eye to look at you and you’re looking back at it,” he said. “They’re very docile and they’re not going to hurt anybody.”

Ms. Carson said spitting was the most aggressive behavior she had seen a sunfish exhibit. She added that she has used kayaks and ropes to tow stranded sunfish into deeper water.

She recalled one rescue when a stranded sunfish became so frustrated that it swam to one of the kayakers who was trying to help it and spat. The fish then swam to Ms. Carson and spat at her, she said.

On Monday, she had just finished rescuing a sunfish in Wellfleet when she saw the Wareham Department of Natural Resources’s post on Facebook.

Ms. Carson said she worried that the fish might have made a wrong turn into the cove as it tried to swim south. Wareham officials told her that the fish had not been seen since Monday and did not appear to be stranded.

She said anyone who sees a sunfish in a harbor or inlet in Massachusetts this time of year should contact her organization.

“They shouldn’t be there,” Ms. Carson said. “These are healthy fish that have just wandered into the wrong place, and it’s usually a cove, a harbor, or tidal area. They can’t figure out how to get out.”

Conway says the more violence erupts, ‘the better it is’ for Trump’s re-election prospects.

At Pentagon, Fears Grow That Trump Will Pull Military Into Election Unrest