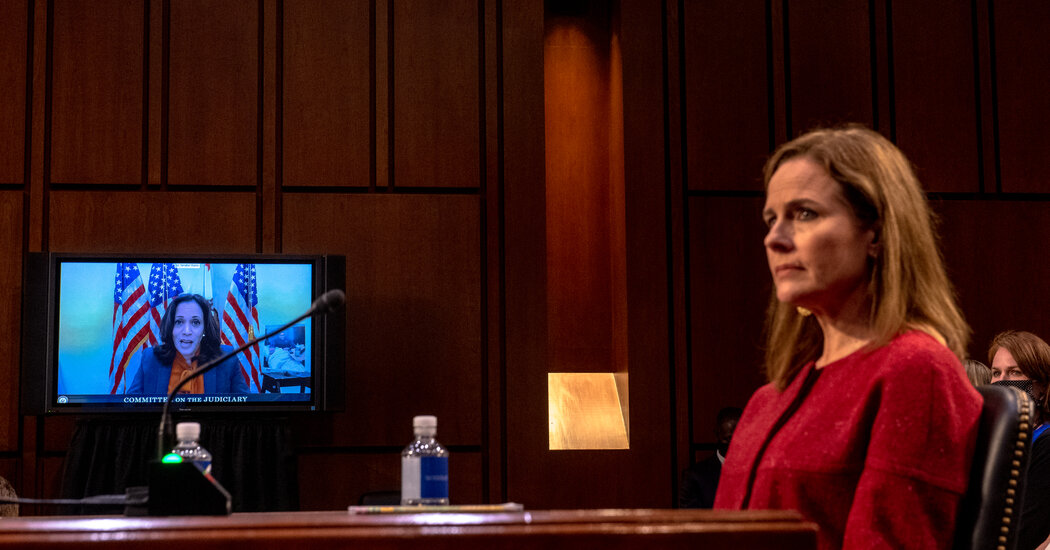 The line was familiar. The follow up was not.

Senator Kamala Harris came ready to press her case against Judge Amy Coney Barrett on the second day of this week’s Supreme Court confirmation hearings, asking if she had been aware of President Trump’s promise to nominate judges who would repeal former President Barack Obama’s signature health care law.

The question concluded with one of Ms. Harris’s characteristic refrains, one she memorably leveled against Justice Brett M. Kavanaugh two years ago: “I’d appreciate a yes-or-no answer, please.”

But unlike then, Ms. Harris let Judge Barrett’s tentative answer slide, hinting at what could become her new professional reality as a No. 2 to the most powerful man in politics.

Before joining the Democratic ticket as Joseph R. Biden Jr.’s running mate, Ms. Harris was known as a politician with a withering prosecutorial style and a skill for crafting viral clips. She built her national brand on high-stakes moments — judiciary hearings, the Democratic primary debate stage — that she molded to her advantage, her years as a district attorney on display as she grilled adversaries.

Now she is trying to balance her penchant for forceful exchanges with her duties as the vice-presidential nominee. After all, being vice president means checking your ego at the Oval Office door.

From her opening remarks to her questioning on Wednesday, she cut a more restrained profile, using her platform at the confirmation hearings to amplify Mr. Biden’s message while studiously avoiding any maneuvers that could jeopardize his lead in the polls. Even her decision to monitor the proceedings from her Senate office rather than in person because of the dangers posed by the coronavirus reinforced Mr. Biden’s case that his administration would be a more responsible steward of public health than Mr. Trump’s.

Her first round of questioning focused squarely on health care and women’s reproductive rights, closely adhering to the campaign’s strategy of linking the Supreme Court vacancy to two issues of deep importance to Democrats.

“Let’s not make any mistake about it: Allowing President Trump to determine who fills the seat of Ruth Bader Ginsburg — a champion for women’s rights and a critical vote in so many decisions that sustained the right to choose — poses a threat to safe and legal abortion in our country,” Ms. Harris said on Tuesday.

On Wednesday, she ran through a list of top-of-mind Democratic issues, quizzing Judge Barrett on racial justice, climate change and workers’ rights. Yet, even as she repeatedly pressed the judge, her questioning yielded no immediately explosive moments — both a reflection of Judge Barrett’s deftness as a judicial nominee and Ms. Harris’s increasing awareness of her new position.

“Do you agree that voting discrimination exists, based on race, in America in any form?” Ms. Harris asked.

Her measured performance reflects the way many Democrats view the battle for the Supreme Court: a fight they will lose in service of one they might win.

With Republicans holding a firm majority in the Senate, Democrats recognize they will almost certainly not be able to prevent Judge Barrett’s confirmation to the court, and many cautioned against criticizing her directly. Instead, Democratic activists, officials and the campaign are urging members of the party to filter their arguments through the lens of the election and to focus on issues that play well among swing voters.

For Ms. Harris, there is little political benefit in harsh personal attacks on Judge Barrett. The committee questioning is unlikely to change the outcome of a confirmation hearing, but a misstep could damage the Democratic presidential ticket’s chances with more moderate voters. And the kind of liberal voter who is following a Twitter play-by-play of the confirmation hearings — and who would have seen a critical exchange — is already energized to support Mr. Biden.

The consolation prize for losing the court for a generation, some Democrats privately argue, could be winning control of the Senate — and the White House.

Along with Ms. Harris, many Democratic senators focused their questions on the possibility that Judge Barrett would vote with the conservative majority on the court to overturn the health care law, a message similar to the one that helped Democrats win control of the House in 2018.

The discussion of health care emerged as such a strong theme that even Republicans couldn’t help noticing.

“At times, I have been confused and I thought we were on the Health Committee instead of the Judiciary Committee, because it has been such a central talking point for every Democrat,” said Senator Ted Cruz, a Republican from Texas. “I get that’s their election message.”

Ms. Harris and Democrats saw a similar opportunity to mobilize suburban women on abortion rights, given Ms. Barrett’s well-documented personal opposition to abortion and criticism of Roe v. Wade, the landmark ruling that legalized abortion nationwide. Most Americans say that abortions should be legal with some restrictions.

While some Republicans praised Ms. Barrett’s opposition to abortion rights, they consciously chose not to make the issue a central focus of their questioning — unlike their Democratic opponents.

For the Biden campaign, Ms. Harris’s disciplined performance came as a relief. A former rival who landed some of the toughest attacks on Mr. Biden from the debate stage during the primary, Ms. Harris spent much of her vice-presidential vetting process persuading those closest to the former vice president that she would be focused on his campaign, rather than on her future ambitions. Some Biden allies still view her with lingering mistrust.

Ms. Harris’s approach during the confirmation hearings follows a similarly deliberate performance during vice-presidential debate last week, aimed at keeping the pressure on the Republican ticket rather than reshaping the race.

Though she sharply challenged Vice President Mike Pence on the Trump administration’s handling of the coronavirus — calling it “the greatest failure of any presidential administration in the history of our country” — the debate had none of the fireworks or television-ready lines that have punctuated some of her past encounters.

Still, there have been flashes of Ms. Harris’s combativeness.

“I imagine you were surrounded by a team of folks that helped prepare you for this nomination hearing,” Ms. Harris said icily on Tuesday when Judge Barrett equivocated on whether she knew of Mr. Trump’s promise to appoint judges who would overturn the health care law. “Did they inform you of the president’s statements and that this might be a question that was presented to you during the course of this hearing?”

But mostly, she proved herself a loyal soldier, just as she had convinced the Biden campaign she would be.

Schools Can Reopen, Germany Finds, but Expect a ‘Roller Coaster’

Nicolas Maduro of Venezuela Wins Right to Appeal Over Gold Held in U.K.

Ruth Bader Ginsburg: Photos of Her Rise to the Supreme Court