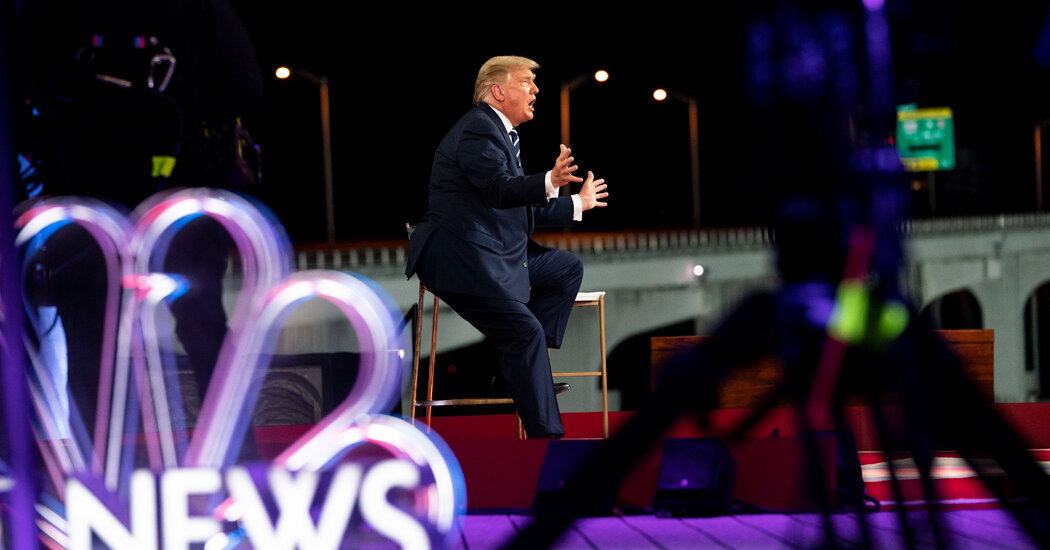 The dueling town halls that aired on separate broadcast networks Thursday night were a microcosm of the parallel universes in which President Trump and former Vice President Joseph R. Biden Jr. are running their campaigns.

The forums replaced what was to be the second debate between the two candidates, after Mr. Trump rejected the decision by the Commission on Presidential Debates to hold the debate virtually because of Mr. Trump’s coronavirus diagnosis.

Mr. Trump, who was interviewed by Savannah Guthrie on NBC before turning to audience questions in Miami, grew angry and defensive almost at the outset, as she challenged him for spreading falsehoods, confronted him about his openness to QAnon conspiracy theorists and coaxed from him that he couldn’t say for sure whether he had been tested for the coronavirus before his first debate with Mr. Biden. Mr. Trump was alternatively hostile and derisive to Ms. Guthrie, a popular “Today” show co-anchor.

Mr. Trump also all but confirmed that he owed about $400 million to creditors, as reported in a New York Times investigation about his taxes. “What I’m saying is that it’s a tiny percentage of my net worth,” Mr. Trump said when Ms. Guthrie pressed him on the specific dollar amount cited in the report.

Over on ABC News, at a very different octane and a very different volume, Mr. Biden answered policy questions from George Stephanopoulos. He also said he wanted proof that Mr. Trump had taken a coronavirus test before their next and last scheduled debate, on Oct. 22.

Mr. Biden’s outing was not completely easy. He again dodged a question on expanding the Supreme Court if he gets elected, though he did say, that he would offer an answer before Election Day but wanted to see how the nomination process for Judge Amy Coney Barrett plays out first.

Mr. Biden also made some news, saying that his support of the 1994 crime bill — which has been blamed for the large-scale incarceration of Black people — was a “mistake,” adding that parts of it had not been carried out properly by states.

Mr. Trump did settle into a rhythm when the audience questions began, and he engaged with some of the voters on policy questions like corporate taxes. Still, at the end of the day, the president may have been better off with a virtual debate after all.