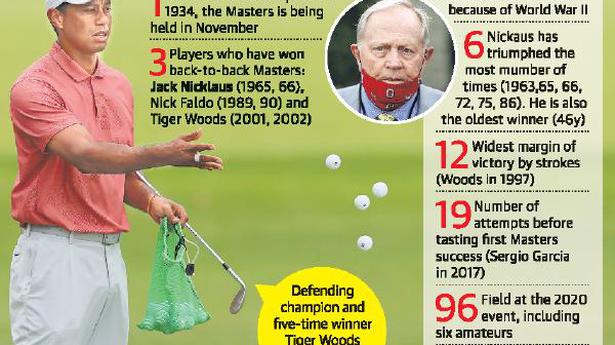 Tiger Woods, still feeling the thrill of last year’s Masters victory to complete an epic comeback, says he can contend again this week thanks to his knowledge of Augusta National.

Former World No.1 Woods, a 15-time Major champion who turns 45 next month, seeks a sixth Green Jacket to match the all-time record of Jack Nicklaus and a record 83rd US PGA victory to break the mark he shares with Sam Snead.

“Do I expect to contend? Yes I do,” Woods said. “It can be done. Having an understanding where to miss it and how to hit the shots around here, it helps.

“It gets a little more difficult as I’ve gotten older and I don’t quite hit it as far. You see past champions… able to contend so late in their careers and hopefully I’ll be able to be one of those guys.”

Woods’ vivid memories of Augusta include his victory last year, feeling the electric atmosphere of the crowd and hugging his children the way he embraced his dad after his first Masters win in 1997.

“The same embrace, 22 years apart, pretty good bookends,” Woods said on Tuesday. “I still get chills just thinking about that.

Woods has been able to keep his jacket away from Augusta longer than usual because Covid-19 postponed the Masters from April to November that also means no spectators attending.

Phil Mickelson, who has five Major titles, takes inspiration from Woods as the 50-year-old left-hander tries to become the oldest Major champion.

“It was one of the greatest feats in the history of sports,” Mickelson said. “I thought it was an incredible comeback knowing many of the challenges he has gone through.

“I was really happy for him and also I think it provides a little bit of inspiration for a lot of us.”

Four-time Major winner Rory McIlroy plans to get out of his own way and use hard-earned grit to capture the long-sought Masters title that would complete a career Grand Slam.