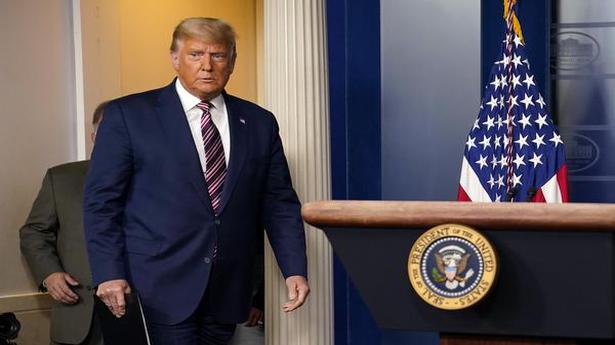 A candidate needs 270 votes in the 538-vote Electoral College to win the presidency.

U.S. President Donald Trump has not conceded defeat to his Democratic rival Joe Biden in the November 3 presidential election. Mr. Trump has alleged voter fraud and mounted legal challenges in several swing States. And he’s not alone. Most elected Republican party officials are yet to acknowledge that Mr. Biden has won the election. On Wednesday, when asked about transition, Secretary of State Mike Pompeo told reporters, “There will be a smooth transition to the second Trump administration”. Attorney-General William Barr has asked the Department of Justice to look into voter fraud claims.

According to the results announced so far, Mr. Biden has won 279 electoral votes against Mr. Trump’s 214. A candidate needs 270 votes in the 538-vote Electoral College to win the presidency. But these are not official results. There’s a lengthy electoral process before the official results are announced on January 6. Usually, the candidate who loses in the general election concedes, allowing a smooth transition. But Mr. Trump’s refusal to concede defeat has raised uncertainty over the transition.

What are swing States in U.S. polls?

It appears that the Trump campaign’s plan is to block certification of results from key battleground States. The campaign has filed lawsuits in Pennsylvania, Michigan and Arizona, asking courts to prevent the State officials from certifying the vote. These three States have 47 electoral votes among themselves, which Mr. Biden has won or is leading, according to the media. Each State has its own timeline to certify the votes. The Electoral College is mandated to meet on the first Monday after the second Wednesday in December, which falls on December 14 this year. And all election disputes in States are required to be resolved six days before the Electoral College date (the ‘safe harbour’ deadline), which is December 8. So, the clock is ticking fast for the States as well as the courts.

What if States are prevented from certifying votes?

The Trump campaign has alleged fraud but hasn’t produced any evidence, at least to the public, so far. So, many experts believe that the courts are unlikely to stop States from certifying results. In that case, the Electoral College will elect Joe Biden the 46th President of the U.S.

But what happens if the disputes in the three States — Pennsylvania, Michigan and Arizona — remain unresolved by December 8? In such a scenario, the State legislatures can step in, keeping Mr. Trump’s constitutional path to re-election still open. All three States have Republican-controlled legislatures. So, if these States are stopped from certifying the results in the event of unresolved disputes, the Trump campaign would want the Republican-controlled State legislatures to send Republican electors to the Electoral College, who could vote for Mr. Trump on December 14.

Even if that happens, there is a problem. Two of these three States — Pennsylvania and Michigan — have Democratic Governors and they could reject the list prepared by the legislatures and send their own. This means conflicting lists from the States would go to Congress, throwing the Electoral College process into limbo.

What happens if there are conflicting lists of electors?

After the 1876 presidential election, the Republican and Democratic parties disputed the results. Democrat Samuel J. Tilden got more popular votes and was on the cusp of the Electoral College victory against the Republican Rutherford Hayes. Results in three states — Florida, Louisiana and South Carolina — were disputed. As results remained unresolved, these States sent duelling lists of electors to the Electoral College, triggering a constitutional crisis. Congress appointed a Commission to resolve the disputes. Tilden finally conceded defeat after the Republicans agreed to withdraw federal troops from the South and end Reconstruction (the Compromise of 1877), and Hayes became the 19th President of the U.S.

After the 1876 dispute, Congress passed the Electoral Count Act in 1887. The Act mandates that if conflicting lists are sent, each chamber of Congress can separately decide which list should be counted. The Republicans are now controlling the Senate and the Democrats have a majority in the House. So, it’s possible that the chambers disagree on the lists. In that event, it’s not clear what happens.

If Congress can’t agree on the lists of electors, the U.S. Supreme Court could be asked to step in. Or, some legal scholars say, Vice-President Mike Pence, as the President of the Senate, could take a call. In such an uncertainty, there are three possibilities. If the Democrats’ list is picked, it would lead to a Biden victory. If the Republican list is counted, Mr. Trump could retain power. Or, if votes from the disputed states are excluded from counting, no candidate will have the majority (270 votes) to win the presidency.

What if no candidate has the Electoral College majority?

If no candidate gets a majority in the Electoral College, Congress will hold a “contingent election” —the House will choose the President and the Senate the Vice President. The U.S. had held contingent elections thrice in the past — in 1801, 1825, and 1837. In the vote for Vice President, each Senator has a vote. In the election for President, not all Representatives could vote. Each State delegation in the House will get a single vote (District of Columbia doesn’t have a vote) — which means the party that controls more States will have a majority. Currently, the Republicans control 26 of the 50 State delegations, while the Democrats have 22. Even if the electoral process drags on to this stage, the whole process has to be completed before January 20, the constitutionally mandated Inauguration Day for the new President. If a new President is not elected by January 20 noon, the House Speaker — Democrat Nancy Pelosi — would become the acting President.

Have earned the right to be named in the Test squad against India: Will...

Women’s T20 challenge: It’s the turn of the women to storm the desert