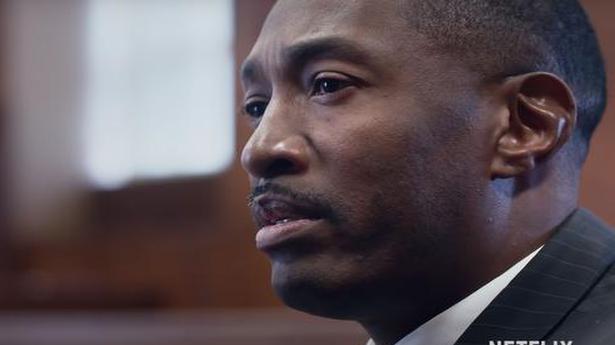 After serving 22 years in prison for a crime that he didn’t commit, Sean Ellis was relieved of the GPS bracelet attached to his feet — the last physical reminder of the fact that he was a convicted felon, a feared cop killer.

He emerged a free man from one of the closed doors of the Suffolk Superior Court Probation Department with news reporters at his heel.

One of them asked him a simple yet powerful question: “With the history of corrupt officials in Boston, how do you walk in this city?” “With my head up,” replied Ellis emphatically. Suddenly an elderly black man who was intently following the interaction chimed in: “But be very careful.”

The scene is not a fictional account of a man caught on the wrong side of the criminal justice system, but a slice of real-life captured by Rémy Burkes in the true-crime documentary titled Trial 4 on Netflix.

The eight-part series portrays effectively, the storm brewing inside the mind of an individual having to serve punishment for a crime he did not perpetrate. The creators dig deep to unmask the hideous countenance of the systemic institutional corruption — arriving at a conclusion which is plain and simple — when the protectors of human dignity and freedom turn out to be its biggest violators.

In 1993, officer John Mulligan of the Boston Police Department was found murdered execution-style inside his car outside a shopping centre. The subsequent outrage and outpouring of grief over his death led to the arrest of a 19-year-old young black man by the name of Sean Ellis.

Despite asserting his innocence, Ellis was subjected to two trials in 1995 that ended in hung juries. In his third trial, he was convicted of murder in the first degree and sentenced to a lifetime in prison.

It was later brought to light that the investigators in Mulligan’s homicide case were indicted on federal corruption charges — they were accused of robbing drug dealers. The slain cop Mulligan himself reportedly indulged in similar activities and even solicited prostitution from underage girls, luring them with narcotics he confiscated from the drug peddlers.

Many inside the Boston police force believed that Mulligan’s maverick lifestyle caught up to him in the end. An honest investigation into his killing would have revealed not only the corrupt undertakings of the slain cops, but also that of his colleagues. Instead, the police used Sean Ellis as a scapegoat. He was projected as the ultimate criminal — a black youth who slaughtered a cop to steal his service weapon. In their pursuit, they manipulated witnesses and planted false evidence to frame an innocent man.

And when all hope seemed to be lost for Ellis and his family, a firebrand defence attorney by the name of Rosemary Scappaichio entered the fray. After more than a decade of legal wrangling and on-ground investigation work, she put together a defence in his fourth trial.

Trial 4 uses raw archival footage from the 90s to capture a young Ellis’ plight as he is pushed into a corner. Slow at first, the initial episodes of the documentary lay down the brickwork for the rest of the story.

The painstaking and somewhat rigid attention to details is what provides this piece with its novelty. However, it also robs it of some of the excitement, characteristic of other Netflix true-crime productions like The Keepers and Making a Murderer.

It uses visual storytelling tools such as animation to recreate the crime scene and the chain of events leading up to Mulligan’s death, making it easier for the audiences to grasp the nitty-gritty of the sordid crime. Testimony from retired Boston police officers as well as from Ellis, his family and legal counsel provide the viewers with a holistic view of the incident.

In a way, the documentary is a reflection of real-life where a significant occurrence is succeeded by patches of drab inconsequentiality. It is the latter, the viewers have to wade through to discover the true merits of Trial 4.

In the final episodes, the show partially lends its attention to city politics, capturing the closely-fought race for the position of the District Attorney of Boston. This is important for Ellis as the DA has the power to dismiss the charges against him.

Ultimately, the story of Sean Ellis is a cautionary tale for all affected by the inherent flaws of the criminal justice system around the world. As his legal counsel Rosemary Scrapacchio so eloquently puts it, “Sean Ellis is not alone. There are many like him sitting in jails waiting for a defence lawyer to save them, and some of them might not be saved, which is unacceptable.”

Trial 4 is currently streaming on Netflix

Gunmen kill 34 in attack on bus in Ethiopia