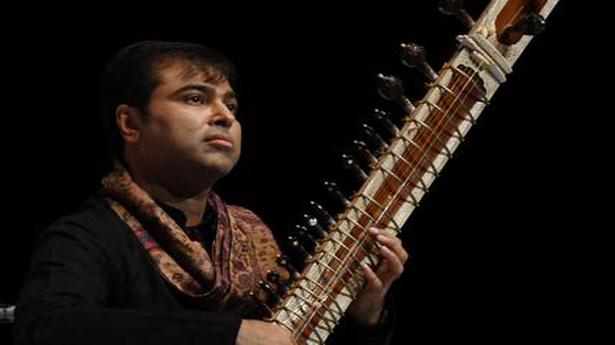 Sitar maestro Purbayan Chatterjee has been on song all during the lockdown, experimenting, going digital and jamming with some extraordinary musicians. On November 21, Purbayan will interpret Carlos Santana’s extensive Latin rock discography by fusing it with the sensibilities of Indian classical, Sufi and folk music.

Keeping him company will be vocalist Gayatri Asokan, Sangeet Haldipur, Rickraj Nath and Shikhar Naad Qureshi. Iconic numbers like ‘Black Magic Woman’ and ‘Game of Love’ will get a makeover as Purbayan weaves magic on the sitar.

This performance is the second in a series in Paytm Insider’s Jim Beam Originals that will see reputed Indian artists creating their own sound to immortal classics of international legends, says a release from the company.

In a Zoom interview with MetroPlus, Purbayan talks about the event, digital concert, fusion music and more… Edited excerpts…

Why was Santana chosen for this special programme?

As a plucked string player, Santana was an obvious choice. Ever since I began learning the sitar, I used to try to emulate the great guitar players of the world. All of us grew up listening to Mark Knopfler, Pink Floyd and so on and Santana was very much part of the regular diet. If you were trying to be part of that little international idiom in your playing, then you are exploring those avenues. It is naturally ingrained in your system. So, me being a sitar player, when this idea came about of exploring one international artiste, Santana was the automatic choice. To be able to play his lick lines or his hooks on the sitar was something we have been trying to do since childhood.

I am glad that Insider.in and Jim Beam Originals came up with this idea of recreating music of international masters with an Indian twist. It is not just an Indian twist. We are adding sprinklings of Indian motifs and Indian melodies. It is a beautiful representation of a common idiom, a common culture or a common language.

Would you elaborate on the Indian nuances you would be enriching the music with?

In the course of our rehearsals, we are trying to look at each song and find things that are either in complete alignment with the song or in complete contrast. So, obviously there is going to be a generous helping of classical music, that being my background. We would pick up a song and see if it connects up with raga Bhoopali and there is going to be a little bandish in Bhoopali. We have also found connections with Sufi songs and music and so we have picked up a little bit of that. The final music will be a surprise [for those joining in the concert]. I am just giving indicators and there will be a little bit of folk music. Coming from India, which has some of the greatest folk music in the world, so much diversity, so many different colours, there has to be folk music. I feel that as an Indian artiste, specifically as a classical artiste, it is my job and duty to showcase some of those traditional art forms and see how they connect up with an international artiste like Santana. We have done this and rehearsed it in a manner that we can bring it to you with a full-on live chemistry – the entire band will be interacting with each other and that is what people want to see.

What are your thoughts on online concerts on digital platforms?

I feel that the online concert scenario or the digital concert scenario is still evolving. Companies like Insider have been at the forefront, and I have been working closely with them right from the outset. It is an ever-changing, evolving platform. There are many platforms that are being globally tried out now.

The world has been hit by this pandemic. While we are hoping it will blow over and it will, there are certain world events that change the face of the world forever and I think this [pandemic] is one of those. As a result of this, we were already going the digital way in terms of our music and trying to release more independent music.

I think this is very good for independent music because it has inspired a lot of musicians to come up with their own stuff. And with the support of companies like Jim Beam Originals, we are able to make that happen, and see our vision come to fruition in an artistic form where we have freedom. When you talk about cinema and more commercial forms of music, then you are often working to a brief. In this case, you have more freedom, thankfully. So this form and this way of making music digitally with people across the world is obviously opening to a global audience. Our concert on November 21, I am told, has people from outside the country also watching. A lot of my fans and students have already picked up tickets.

What, in your opinion, are the plus and minus points of digital concerts?

If you are going to have a live audience in front of you with the energy that scenario provides you, then you are going to accept the compromises [that comes along with it] because obviously you are not necessarily in a controlled environment, as in the insides of a studio where you can control the sound, the acoustics. So there are both sides to it. The live audience has its own energy but if you are able to go to a studio and at least play with each other, then, I think, you got to imagine that audience sitting out there, listening to you. It is not like being in a big auditorium or a big stadium where Santana himself used to perform. So you got to feel that energy within you. The connecting point is the music. If you can make the music reach out and connect, then I believe you can reach out and connect through the ether also.

What do you think about fusion music and crossover concerts?

I think it is also about opening Indian audiences to different genres of music. It is a very important process and it has to happen. Unfortunately, there isn’t a great deal of awareness about many genres. People know that there is film and non-film music. Film music is a kind of melting pot, all credit to the great music directors and composers of our times. They have brought in elements from Latin music, elements of Afro-Cuban music, hip-hop, jazz and all that. Now my question is how much is the audience aware of which is what genre, what is the original influence of the song? Unfortunately, the Indian psyche is not very generous about giving credit to the source. We might be working to a brief, playing for ad films, and all that but credit should be given where it is due.

If you are borrowing a musical idea, a thought or something from somewhere, it is fine. But you need to say that you have been inspired by that thought or idea. If I am inspired by Santana’s music, I can extrapolate some of that into my classical playing because it is possible. When we are playing music, you are interpreting a bunch of notes and phrases, within a specific rhythmic framework. So, if you are going to give credit where it is due, you are being fair and true to yourself and the entire music world. But that, unfortunately, is not where it should be in India and I am glad that we are able to do some of that by talking about genres, by talking about what these great masters did, how they approached their music.

In spite of the popularity of fusion music, there are many classical musicians who are not too happy about fusion concerts or music.

All I can say is that there are people who are willing to go up there and try new things. And there are people who, I know, have sat in their homes their entire lives and believe that that is the world. When you sit in a confined space, you might tend to think that the entire world is that, unfortunately. Call it tunnel vision. Your world is as big or as small as your mind is. The funny thing is, it shrinks as you get out and you can see that this big wide universe with all its different colours and flavours shrinks into one little thing in your mind because there is so much in common.

The instrument that I play, the sitar, itself has its roots in fusion. , There is the veena, an Indian instrument and, of course, there is the rudra veena and the vichitra veena, two kinds of veena. Then you have the Persian influence of the zither, of the lute, the rubab….So the sarod, the sitar are all instruments that have their roots in fusion. The only way we can make something grow, the only way we can make something thrive is to look at in perspective, and not look at it with tunnel vision.

Tickets for this concert on November 21 are priced at ₹299 each, season pass for all 9 shows is priced at ₹1,500 and can be booked on: https://bit.ly/PR_JBO_PurbayanChatterjee

When Trump became Thanos: meet the filmmaker behind ‘America: Endgame’