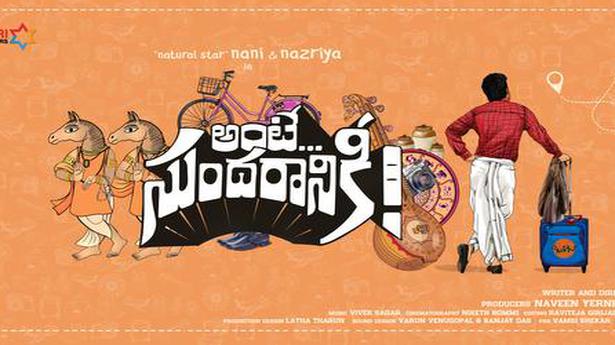 The collaboration between director Vivek Athreya and actor Nani, which will introduce Malayalam and Tamil actor Nazriya Fahadh to Telugu cinema, was a talking point on social media a few days ago. On Saturday, the team formally announced the title of the Telugu project — Ante Sundaraniki.

Ante Sundaraniki is Nani’s 28th film and Vivek Athreya’s third, after Mental Madhilo and Brochevarevarura. To be produced by Mythri Movie Makers, the new film is touted to be a musical rom-com. The video that announces the title begins with indistinct murmurs of people gossiping about the protagonist, and ends with Nani appearing on stage sporting a traditional pancha kattu.

The film is scheduled to release in 2021 and will be third collaboration between Vivek Athreya and music composer Vivek Sagar. Niketh Bommi has been roped in as the cinematographer.