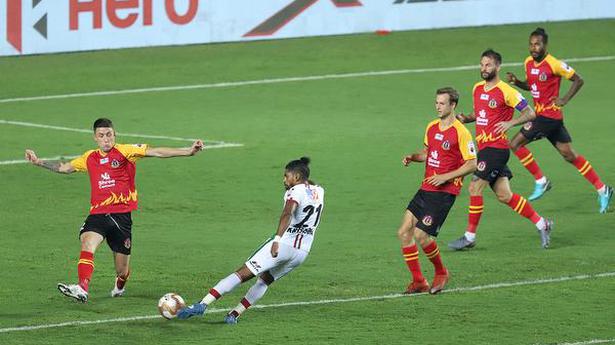 East Bengal enjoyed a clear edge in terms of possession in the opening half, but it was Bagan which had the best chance to score. In the 36th minute, midfielder Javi Hernandez unleashed a powerful left-footer that was headed for goal, but East Bengal goalkeeper Debjit Majumder pulled off a fantastic save. Hernandez’s effort was easily the highlight of the first half.

Though East Bengal had quite a few openings in the first half, it was let down by poor finishing. Balwant Singh and Congolese forward Jacques Maghoma failed to get it right in the final third despite all the hard work.

Immediately after the break, ATKMB’s Roy Krishna pounced on the first opportunity that came his way.

The goal was a result of a quick build-up which saw Jayesh Rane and Hernandez combining in the middle and releasing Krishna, who made no mistake.

Manvir, a 63rd-minute replacement for an off-colour David Williams, sealed the contest with a fine solo.

UK virus strain has been in Germany since November