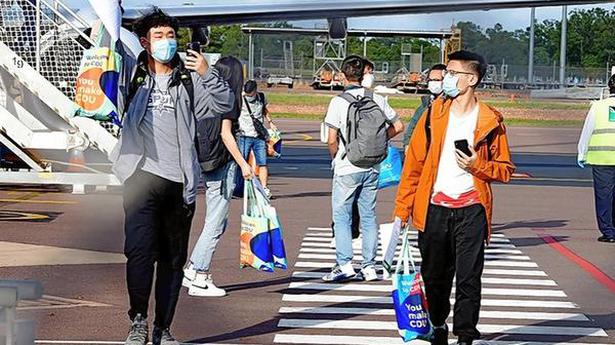 They came on a flight chartered by Charles Darwin University as part of a pilot project.

International students have arrived in Australia for the first time since the country shut its borders to curb coronavirus in March, with a charter flight touching down in Darwin on Monday.

Australian universities have been leaking cash due to the country’s indefinite border closure.

A plane chartered by Charles Darwin University (CDU) carrying 63 international students arrived in the northern city of Darwin as part of a pilot programme aimed at kickstarting the higher education industry.

The students — from mainland China, Hong Kong, Japan, Vietnam and Indonesia — travelled to Singapore to catch the flight and will now spend 14 days in a government quarantine facility.

The mix of new and continuing students are enrolled across a range of undergraduate and postgraduate courses including law, nursing and engineering.

In a statement, CDU said it was “an important first step in the recovery of the international education sector in Australia”.

Education is listed as Australia’s fourth-largest export —behind iron ore, coal and natural gas — with more than 5,00,000 international students enrolled last year, bringing about Aus$37 billion into the economy.

Lobby group Universities Australia said in June that the sector could lose $11 billion as a result of the border closure.

Universities — which as public institutions were omitted from a government coronavirus wage subsidy scheme — have been shedding thousands of jobs.

Similar proposals by universities in Canberra and Adelaide were previously scrapped, as the government came under pressure to reserve places in quarantine facilities for Australians stranded overseas.

Policies limiting the number of returnees have left more than 35,000 Australian citizens stuck abroad, despite government promises to bring them home by Christmas.

Many international students also remain stuck in Australia, and some are relying on charities for food handouts after they were excluded from support packages.

Can Trump pardon himself? Would the courts reject the move?

‘Tenet’ review: Christopher Nolan’s thriller is an exhilarating ride through space and time