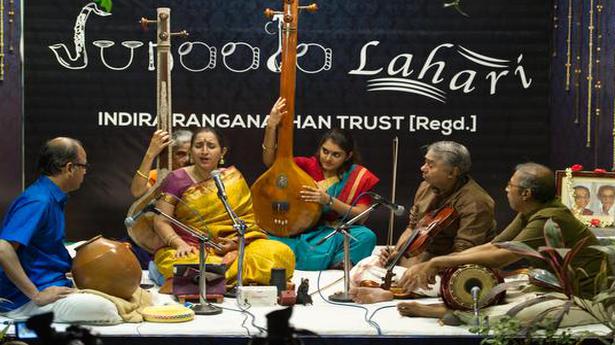 In what is generally the warm-up phase of a Carnatic concert, Aishwarya Shankar sprang a pleasant surprise by treading at a particularly slow pace. Into the 12th minute, she initiated a Tyagaraja kriti with unusual slowness. Without dragging in the least, ‘Enta vedukondu’ brought out the beseeching mood of its Telugu lyrics. The suite in Saraswati Manohari raga effectively set the contemplative tone for the entire performance.

The young vocalist owes much of the erudite leisureliness to a school that has branched out of Musiri Subramania Iyer’s (1899-1975) music. The expansiveness of Aishwarya’s anupallavi session, starting with ‘Chinta dichuta,’ carried the stamp of her guru Suguna Varadachari, a disciple of Musiri. Aishwarya employed the first half of that line as niraval. Minor flaws apart, the exercise merits appreciation. Such is the challenge, which violinist R K Shriramkumar too sensed in his turn.

To build sweeping arches with Saraswati Manohari is an aesthetically pleasing and technically strong idea. The raga has its parent scale in Harikamboji, which can be treated classically even with plain notes. The unhurriedness of the piece in Desadi tala magnified the role of the percussionists as well. Both K. Arun Prakash (mridangam) and N. Guruprasad (ghatam) came up with the patterned playing the occasion merited.

Aishwarya’s kutcheri marked the end of the Indira Ranganathan Trust’s 2020 Margazhi calendar, and the singer opened it serenely with Muthuswami Dikshitar’s ‘Sri nathadi guruguho’ in Mayamalavagowla.

A relatively quick ‘Sri sankara guruvaram’ (Nagaswaravali) was the bridge to the centrepiece. In Bhairavi, soft touches laced the weightiness of the raga in an alapana that spanned a good 21 minutes, vocal and violin put together. ‘Nee padamule gatiyani’ embodied the beauty of Bhairavi with its essential sways studded with gamakas.

The niraval, ‘Omkara sadani bhavani,’ reinforced Aishwarya’s architectural skills while proving yet again the power of Musiri-style repose. A hint of falsetto Aishwarya deployed in an upper register of ‘Enta vedukondu’ made no reappearance in the hour-long Bhairavi package. The tani avartanam was suitably devoid of agitation.

A short piece in Kedaragowla followed. Succeeding this was a virutham. ‘Namami dootam ramasya,’ penned by 17th-century theologian Raghavendra Tirtha, in Kapi. Strung to it were lines tuned in Hamsanandi and Behag. A sudden flurry of Hindustani-accent melodies, only to wind up with the quintessentially Carnatic Yadukula Kamboji. That was the raga for ‘Swami mukhyaprana,’ written by Purandaradasa. The bhajan bore the lightness typical of the last leg of a two-and-a-half-hour concert. A breezy Yamunakalyani number preceded the mangalam.

Arun Prakash, being left-handed, customarily sits on the right of the stage. Shriramkumar chose a slot closer to the vocalist, apparently to support Aishwarya, who is also his protégé. That worked for the camera too.

Trump faces tough road in getting Supreme Court to intervene