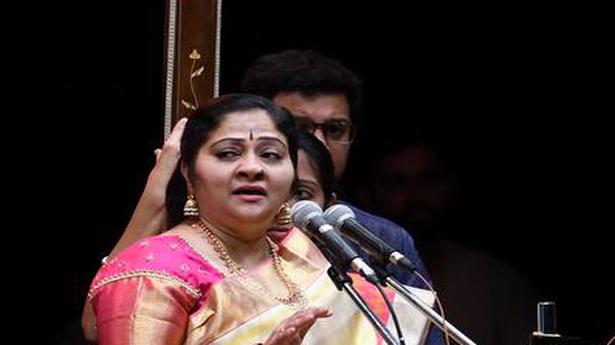 One of the challenges in a concert of shorter duration is to offer a variety of ragas, kalapramanams and composers. It calls for a good thought process and execution skills, both of which Sowmya has in abundance. Her concert had a silken feel to it arising from the soft handling of ragas such as Takka, Karaharapriya and Saranga.

Sowmya sang ‘Eranapai’ (Thodi varnam), a safe start to get the voice into action and fluency. The next piece, ‘Varana mukava’ (Hamsadhwani, Koteeswara Iyer) has a nice rhythm to it, with features like a delayed start from samam, the first line aligned to the arohanam, in-built laya, multiple speeds, and beautiful Tamil words. The brief swaras also kept up the unique character of the composition. Sowmya sang a karvai-laden raga alapana of Takka, not often heard in concerts since the days of MLV. Her intelligence came through in her attempt to keep the raga swaroopam intact and away from adjacencies.

Embar Kannan responded well with phrase choices that kept circling the lifeline of the raga. Tyagaraja’s ‘Raka sasivadana’ is the popular kriti in this raga and Sowmya’s handling of it was sober. It is a good idea to present some swaras whenever a rare raga is sung, to expose and drive home the raga lakshana. The chittaswaram and swaras at ‘raka’ were engaging without being dreary.

Dikshitar’s Panchalinga kriti invoking the god of fire at Tiruvannamalai, ‘Arunachala natham’, (Saranga, rupakam 2 kalai) was presented in an enjoyable kalapramanam. It provided a change in the tempo of the concert. Sowmya’s Karaharapriya alapana was largely conventional, but some micro-sangatis offered embellishments. Kannan blended his sweet violin notes and a purposeful raga track to offer something that was larger than what was indicated by the time he took. Sowmya chose ‘Janaki pathe,’ a Papanasam Sivan masterpiece in the raga with a bounty of words and a Tyagaraja-style flow. Niraval at ‘Saroruha charana’ was a smart choice given its ateeta eduppu and janta swara style of starting. Sowmya and Kannan laid more accent on the top half of the scale in the niraval with characteristic phrases. Swara korvai was measured but the appointment with kuraippu was kept, with landings on ‘da.’ Despite the time limits, the vistara of the main piece was not compromised, but there is always more to display in such a piece. ‘Bhajare ethunaadam’ (Sadasiva Brahmendral, Pilu) complimented the song list as a bhakti piece in a soulful raga.

Embar Kannan, with an eye on the clock, brought out the essence of alapana and niraval, keeping his interventions crisp. Senior percussionist Neyveli Narayanan’s competent playing enhanced the concert’s vitality, and propped it up when the energy sometimes seemed to slacken. H. Prasanna on the ghatam supported well.

‘Dickinson’ is where classic meets contemporary

Pope says faces of children in Syria should touch all consciences