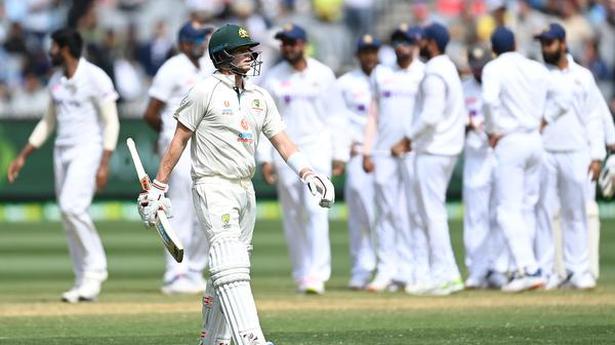 Impressive deliveries, pressure from fielders, and a bit of trickery played a part

Behind the Indian resurgence in Melbourne after the winter of 36 were quiet resolve and meticulous planning.

Beneath stand-in captain’s Ajinkya Rahane’s harmless exterior lurks a ruthlessly attacking captain who does not miss a trick, with his aggressive bowling changes and field placements.

If we go to the specifics, the manner India dismissed Steve Smith in both the innings is testimony to its think-tank.

Ashwin does him in

In the first Test at Adelaide Smith perished to an under-cutter from the impressive R. Ashwin; it was a delivery of side-spin that went through straight when Smith played for turn.

This dismissal was obviously playing on Smith’s mind when he faced the ace off-spinner at Melbourne in the first innings.

Rahane had a ring of fielders around the bat for Smith. Among the catchers, crucially, was a leg-slip. This time, Ashwin spun one across Smith; it was a top-spin delivery. Smith, instinctively, played with the turn, and was picked up at leg-slip.

In the second innings an inspired Jasprit Bumrah dismissed Smith, who once again fell early. Now a batsman’s strength can also be his weakness.

Smith has gathered a mountain of runs in his career by walking on to the off-side, leaving his leg-stump open — it is a bait for the bowlers — and when they attempt to knock the leg-stump, the Aussie picks them up for runs with whips and drives.

Worse, with the line being leg stumpish, the pacemen in particular find it hard to shift back to off-stump. By the time they accomplish that, Smith would have dug in deep.

Now, how Bumrah got Smith out in the second innings at the MCG was all about precision and a little bit of trickery.

Once again, Smith moved towards the off-side, offering a clear view of the leg-stump, but Bumrah’s delivery was on a good length, so the Aussie couldn’t whip or drive and the ball was also a tad slower. Smith missed and the sphere clipped the leg-stump bail. A decisive moment.

In the absence of David Warner much for Australia hinged on Marnus Labuschagne and Smith. And Labuschagne was removed by Ashwin in the second innings with a little bit of sorcery.

This was again an under-cutter, angled across Labuschagne. The side-spinning ball hissed off the surface, took the nick and settled into slip’s hands.

Bowlers are the key

There was a fighting hundred from Rahane, a classy debut by Shubman Gill, but it is the bowlers who eventually win you Tests.

And spare a thought for debutant paceman Mohammad Siraj, who moved the ball away, got it to nip back at a sharp pace and bowled his heart out. And Ravindra Jadeja pulled his weight as an all-rounder.

This series now is wide open.

Tourism on track in the world’s largest cave