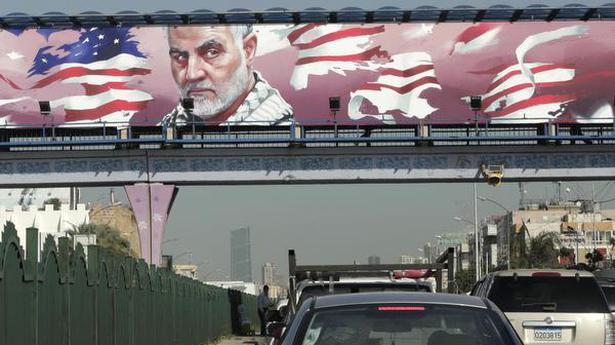 The military commander was killed by the U.S. in January 2020

Iran this week honours military commander Qasem Soleimani who was killed a year ago by the United States, an arch enemy, and is revered as a heroic warrior across the Islamic republic.

Since his death in a drone strike in Baghdad on January 3, the “martyr” Soleimani has entered the ranks of Iran’s glorious generals, immortalised in portraits, sculptures, ballads and an upcoming TV series. The strike had sparked mourning across Iran.

The commemorations on Sunday come only weeks before U.S. President Donald Trump, who ordered the killing, leaves the White House and Joe Biden takes over, offering hopes of a somewhat less bellicose relationship.

Soleimani’s killing at the age of 62 sharply heightened tensions between Washington and Tehran, whose decades-old animosity had deepened when Mr. Trump withdrew from Iran’s nuclear deal and launched a “maximum pressure” campaign to isolate Iran.

Within days, Iran retaliated to the killing of a military leader long deemed untouchable by firing rockets at Iraqi bases housing U.S. forces, which claimed no lives but caused injuries and preceded a tragedy.

In the tense hours that followed the rocket strikes, when it appeared the conflict could escalate further, Iran accidentally shot down a Ukrainian passenger plane near Tehran, claiming the lives of all 176 aboard.

A year on, Iran is preparing to honour Soleimani, whom the U.S. had labelled a “terrorist” in 2005, but whose portrait has been displayed by supporters in Gaza, Iraq, Lebanon, Pakistan, Syria and Yemen.

The anniversary comes as sanctions-hit Iran remains in the grip of the region’s worst outbreak of COVID-19, which has killed more than 55,000 of over 1.2 million people infected in the country.

Soleimani headed the Quds Force, the foreign operations arm of the Islamic Revolutionary Guard Corps, which directly answers to Iran’s supreme leader Ayatollah Ali Khamenei. A veteran of the 1980-88 Iran-Iraq war, he went on to oversee Iran’s military operations in Syria, Iraq and elsewhere.

In the eyes of many Iranians, the country’s projection of power beyond national borders under Soleimani saved the multi-ethnic nation from the conflict suffered by Iraq, Afghanistan and Syria. Mr. Khamenei had already declared him a “living martyr” before his death, and in 2019 Soleimani became the only recipient of the highest military honour, the Order of Zolfaghar, since the revolution.

Attacks on 2 villages in Niger kill at least 100 people