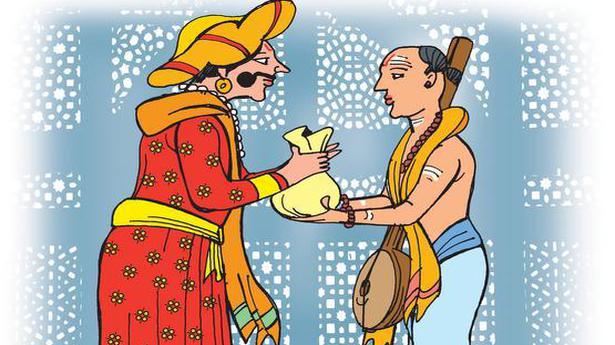 The Thanjavur Maratha kings were among the greatest patrons of the arts, and Carnatic music flourished during their reign with an ever-increasing number of vidwans offering a veritable banquet of music at their courts. Thanjavur thus became the royal seat of music.

The Maratha kings won the hearts of the vidwans with their deep appreciation of music as well as their awards and generous endowments. The titles and honorifics reveal how well the musicians were appreciated — Veenai Perumalaiyer, Pallavi Gopalaiyer, Irattai Pallavi or Sanjeevi Sivaramaiyer, Sallagal Krishnaiyer, Ghanam Krishnaiyer, Tsoukam Srinivasaiyengar and Thodi Seetaramaiyer. To the kings also goes the credit of patronising Pachimiriyam Adiyappaiya, who was not only a great musician himself, but had also taught many musicians, including some of those mentioned above.

During the reign of Serfoji — another connoisseur of the arts — there was a talented musician named Narasaiyar. Once, in the king’s presence, he sang the ragam Sankarabharanam, with an expansive alapana and imaginative kalpanaswaras. The king and the audience were enthralled with his singing. “We have never heard Sankarabharanam sung like this!” they exclaimed unanimously. The king gave the musician many gifts and bestowed on him the title ‘Sankarabharanam’ Narasaiyar. And that was how he was addressed thereafter, this ragam becoming a popular choice at all his concerts.

Once Narasaiyar, deep in debt, was forced to borrow, but his efforts to find a lender were in vain. He approached Ramabadra Moopanar of Kapisthalam, a wealthy and generous music connoisseur. After enjoying Moopanar’s warm hospitality for a few days, he gently broached the purpose of his visit.

“I have incurred some unexpected expenditure. I feel greatly inhibited about asking anyone for money, but then I remembered you. I thought I might get a loan from you.”

“Loan? How much do you need?” asked Moopanar.

“You say you want a loan. Will you pledge anything as security?” asked Moopanar.

“Yes, I will,” said Narasaiyar, after some thought.

“What will you give as security? An ornament, an abharanam. Let me see it,” said Moopanar.

“You cannot see it, you can hear it, it is imperishable, it is a spring of joy, it is my ragam Sankarabharanam. I pledge it. Until I return this gold, I promise I will not sing it anywhere.” Moopanar agreed and gave the gold. Narasaiyar signed a deed, left with the gold and settled his debts. After that, he sang other ragams at his concerts but never sang Sankarabharanam.

At this time there lived in Kumbakonam a wealthy man named Appu Rayar, a high-ranking employee of the East India Company. Since he wielded influence in Thanjavur and Tiruchirapalli, he was called Ubhaya Samasthana Diwan. Wallis, a British officer had great regard for Appu Rayar, so he was even called Wallis Appu Rayar. He owned properties in Reddirayar Agraharam in Kumbakonam. A wedding came up in Rayar’s family. He wanted to celebrate it grandly, and he arranged for concerts by the best musicians, including Narasaiyar. During the concert, Appu Rayar and the audience requested Narasaiyar to sing Sankarabharanam. Narasaiyar explained that he had pledged the ragam, and could not sing it until he had repaid the loan. Appurayar was astonished to hear this and offered to help him repay the loan.

He sent an emissary with the gold (together with the interest accrued) to Moopanar, asking him to close the loan and redeem the pledge. Moopanar immediately set out to Kumbakonam and met Narasaiyar and Appu Rayar.

“Forgive me,” said Moopanar. “The great vidwan has the right to ask me for any amount. Is not my wealth only to help people like him? It hurt me that he needed a loan. In jest, I asked for security and he offered the ragam. It shows his integrity that he has not sung it since. This money is not mine, it is his. You give it back to him. Moreover, for imprisoning Sankarabharanam all these days, let there be a penalty on me, also to be paid to him. Here is the release deed.”

“We have seen borrowers returning the loan with interest. But for a lender to return the money along with penalty is unheard of,” said everyone, amazed by Moopanar’s magnanimity.

The next day, at the wedding, Narasaiyar sang Sankarabharanam and its notes poured like nectar from the heavens on the audience below. And Narasaiyar became Appu Rayar’s favourite vidwan.

From a collection of U.Ve.Sa’s essays, translated by Prabha Sridevan & Pradeep Chakravarthy and edited by Mini Krishnan.

COVID-19: Deepika Padukone has joined hands with Instagram to curate a ‘Wellness Guide’

For Bengaluru marathoner Manoj Bhat, running is a spiritual experience