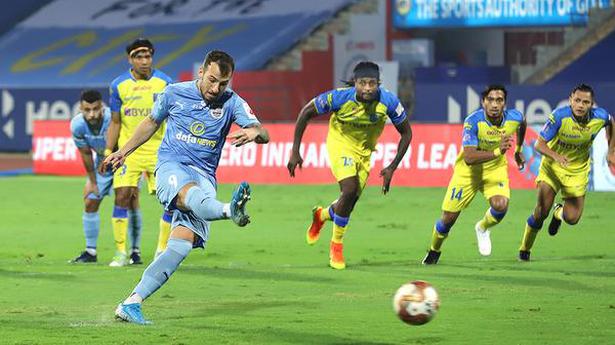 Just 11 minutes made all the difference. Mumbai City FC toyed with Kerala Blasters in the first half and staved off a strong fightback in the next to finish with a 2-0 victory in the Indian Super League at Bambolim’s GMC Stadium on Saturday night.

Striker Adam Le Fondre scored off a penalty in the third minute and midfielder Hugo Boumous added one more eight minutes later as the Blasters paid the price for poor defending. The victory carried Mumbai to the top of the 11-team table with 19 points while Blasters stayed ninth with six.

Despite having a 12-day break, Sergio Lobero’s boys looked like they had lost none of their touch.

They moved up with quick, crisp passes and the Blasters’ defence was frequently in trouble.

Blasters conceded a penalty soon after the start when defender Costa Nhamoinesu brought down Boumous.

A few minutes later Ahmed Jahouh, with a 75-metre freekick from inside his own box, put the ball in Boumous’ path and the midfielder smartly foxed goalkeeper Albino Gomes with a diagonal shot that went into the far corner.