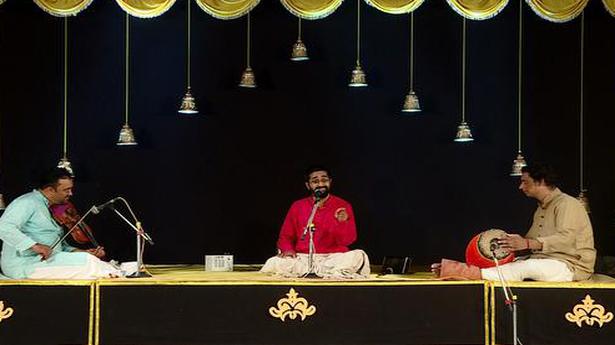 Abhishek Raghuram’s concert was, well, good. There was nothing in it to get excited about, nor was there anything to take exception to. Of the four main elements — Jaganmohini (Gopalakrishna Bharati’s ‘Sivakamasundari’), Kanada (Dikshitar’s ‘Balambikaya’), Saveri (‘Undu mada kalitran,’ a Thiruppavai) and Mohanam (Tyagaraja’s ‘Evarura’), the most enjoyable was the one on which the singer dwelt the least — the Saveri piece. The text-book Saveri began with a brief alapana which went up to the crest of the curve and, without bothering to ski down the descent, Abhishek took up Thiruppavai from the last two lines (beginning with ‘senthamarai’). There was little scope for violinist H.N. Bhaskar except to keep up. Overall, it was a neat Saveri.

The concert opened with Jaganmohini, presented in considerable detail, with too many sangatis in the opening line, which was perhaps a bit unwise because the rendition took too long to move on.

The Kanada alapana began low and slow and, given the long anchoring in the lower notes, one expected the raga to be sketched out fully. But Abhishek strangely chose not to go beyond the upper sa and abruptly picked up the pallavi line of the composition. An alapana, however brief, is expected to be full-fledged; any departure from that tradition must have a reason. The piece, therefore, has to be stamped ‘incomplete.’

Then came Saveri, the second Mayamalavagowla derivative within 20 minutes, following which the vocalist took up Mohanam with a plain-jane alapana. Abhishek stopped at the upper notes and let the violinist present his essay of the raga. When Bhaskar finished playing, the singer seemed to go back to the alapana, but after a karvai on the upper ga, he plunged into a Tyagaraja kriti, choosing to begin it with the anupallavi line (‘Savana rakshaka’). After you move to the pallavi line, returning to the anupallavi becomes somewhat of an overkill. But the rendition of the composition was good and he took up the line beginning ‘Ijaalamu’ for niraval — the only niraval in the concert — going through it like rafting in the rapids. When the niraval ended, instead of attaching swaras to the niraval line, he landed them alternately on the words ‘Evarura’ and ‘Ninnu vina’.

The accompanists made up for the lack of an audience. While Bhaskar’s admiration for the vocalist’s singing seemed to border on devotion, mridangist Delhi Sairam displayed his approbation by nodding his head vigorously, a compliment that the singer returned when he played a nice thani.

Qatar rules out normalisation of Israel ties for now

How the tide turned for Santhome in 1983