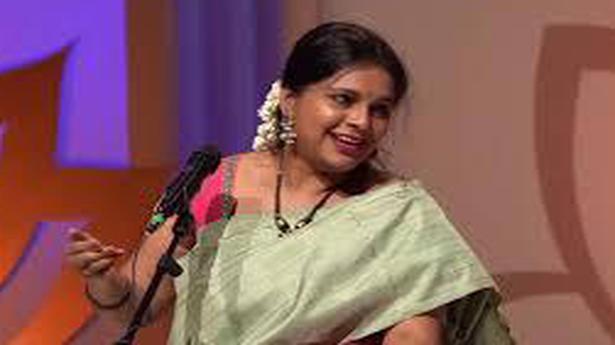 Sriranjani Santhanagopalan’s concert for the Music Academy showed her continuing rise and keenness to embrace challenges. Credit is also due to her for trying to pack in a lot more than the short duration allowed. Dikshitar’s Navagraha kritis have a unique charm with their blend of lyrical beauty and raga lakshana.

Suratti, the rakti raga, was a good choice at this point. One looked for a more sensitive portrayal of the raga in the alapana. Chidambaram Badrinath eschewed briskness and stayed in the karvai mode to impart the right rasa. Tyagaraja’s ‘Bhajana parula’ (rupakam) has its own raga contours that lend themselves to greater exploration through niravals, but perhaps due to time constraints, this was avoided.

In modern concerts, swaras are the winners and niraval is the poor cousin. It’s a pity considering that some yesteryear musicians considered niraval the highest manodharma challenge.

Sriranjani’s Bilahari alapana was both sparkling and detailed, visiting all the classic twists of the raga, with caressing touches while descending to the madhyamam. Badrinath again distinguished himself with a slick, no-gimmick essay. ‘Sree Chamundeswari palayamam’ by Mysore Vasudevachar is one of the best compositions in Bilahari and Sriranjani sang it in an engaging kalapramanam as industriously as it is meant to be sung.

The song also has a beautiful chittaswaram that has sarali, janta and even a korvai built into its structure. The rendition gained more majesty with the multi-speed singing of the chittaswaram. There was an intelligent swara sequence with laya plays and a fiery finish.

No stone was left unturned to give a wholesome feel to the concert as Sriranjani sang pleasing viruthams in Vasantha, Khamas and Madhuvanti (pasuram ‘Kondal vannanai’) followed by a Lalgudi Jayaraman thillana.

Sriranjani’s voice was sprightly and aligned well to her ideas. With time, it will acquire more refinement and a softening of the higher flights. Chidambaram Badrinath delivered another strong performance on the violin. Mridangist Akshay Anand lagged behind in the first part of the concert but came alive later, especially with his thani. The sub-senior slot could be expanded beyond the crammed 60 minutes to allow the artistes to show off their skills better.

The people behind the COVID 19 vaccine reaching you

WHO experts to visit China to trace COVID-19 origins