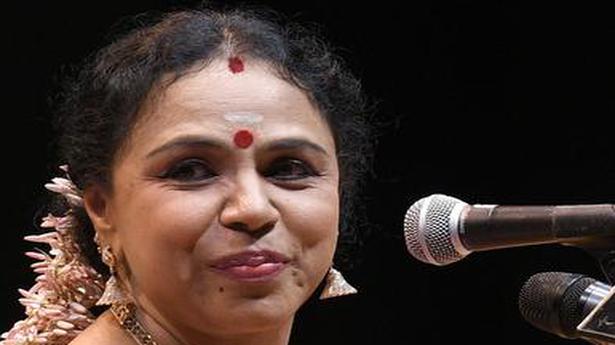 To say that Sudha Ragunathan’s voice had spark is not news. But what brightened the mood at her concert this week was the sensitivity and emotion she lent to the two main pieces in Suddha Saveri and Kiravaniat her concert for the Music Academy.

The first two songs followed the script. A brisk ‘Sami ninne’ (Thodi varnam) and ‘Sudha madhurya bhashana’ (Tyagaraja, Sindhuramakriya) provided the verve and tempo that her concerts are known for. The twist in the lyric of the first line in the second song was not lost on the sharp listeners.

The natural laya and swaras at ‘Sudha’ offers interesting kalpanaswara manipulations and Sudha, along with Charumathi Raghuraman (violin), came up with a volley of creative patterns reminiscent of Madurai Mani Iyer.

The overall feel of the Suddha Saveri alapana was distinctive and engaging. Perhaps the Hindustani touches, short low-tone phrases, and haunting journeys around ‘da ma ri’ made it sound different. It matched the Dikshitar version of Devakriya, the song being ‘Sri vatuka natha’ in misra chapu. Sudha paced the kriti well, with a good swara segment, her staple, at ‘Deva devakriya.’ Charumathi’s music and persona is unassuming but intense.

‘Ennai nee maravadhe’ (Amritavarshini, Dandapani Desikar) was a breezy filler that helped Patri Satish Kumar to do a ‘breathless’ on mridangam. With her choice of songs, Sudha ensured diversity in the tempo. She overcame a quivery start to sing a highly classical Kiravani, with impactful phrases at the tara stayi. She managed to keep the wear and tear of her voice to the minimum.

Charumathi’s Kiravani had plenty of sowkhyam. ‘Chandrasekaram ashraye’ in kanta triputa composed on Kanchi Mahaperiyava by scholar Dr. V. Raghavan has depth in raga and lyrical expressions, allowing Sudha to dwell at leisure in the kriti and the niraval at ‘Kara abhayamudram’. These moments in the concert were quite sublime. And in the last piece, Dr. Balamuralikrishna’s thillana in Brindavani, Sudha poured energy.

Charumathi added melodic value to the concert, while Patri Satish Kumar capped his brisk contribution with a good tani avartanam, with Raman on the morsing. Raman also got some opportunities to show his skills. Sudha Ragunathan’s tenure at the top of the rasika charts extends further, thanks to her presentation style and on-stage abilities.

Data | What is the COVID-19 vaccine policy of countries across the world?