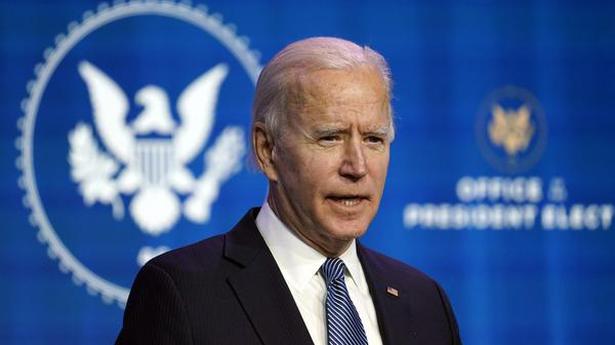 Mr. Biden says the President has “made his contempt for our democracy, our Constitution, the rule of claw clear”

President-elect Joe Biden on Thursday denounced the rioters who stormed the U.S. Capitol as “domestic terrorists” and he blamed President Donald Trump for the violence that has shaken the nation’s capital and beyond.

The protest by Mr. Trump supporters that breached the security of Congress on Wednesday was “not dissent, was not disorder, was not protest. It was chaos.”

Those who massed on Capitol Hill intending to disrupt a joint session of Congress that was certifying Mr. Biden’s election victory over Mr. Trump “weren’t protesters. Don’t dare call them protesters. They were a riotous mob — insurrectionists, domestic terrorists. It’s that basic,” Mr. Biden said.

In solemn tones, Mr. Biden said the actions Mr. Trump has taken to subvert the nation’s democratic institutions throughout his presidency led directly to the mayhem in Washington.

“In the past four years, we’ve had a president who’s made his contempt for our democracy, our constitution, the rule of law clear in everything he has done,” Mr. Biden said. “He unleashed an all-out assault on our institutions of our democracy from the outset. And yesterday was the culmination of that unrelenting attack.”

Also read: ‘I really don’t know why she decided to do this’: Mother-in-law of the woman shot dead in U.S. Capitol

The mob of hundreds of Trump backers broke into the Capitol and roamed the halls looking for lawmakers, who were forced to halt their deliberations a nd evacuate to safety. The violent protesters were egged on by Mr. Trump himself, who has falsely contended that he lost the election due to voter fraud.

Mr. Trump’s claims have been repeatedly dismissed in the courts, including the Supreme Court, and by state election officials from both parties, and even some in his own administration. But the president has gone to greater and greater lengths to try to overturn the results, culminating this week in efforts by a small group of Republican

Senators and larger numbers in the House to objects to the congressional certification of the results on Wednesday and the scene of violence at the Capitol. After the disruption, Congress returned to work late Wednesday and affirmed Biden’s victory early Thursday.

China likens Pompeo to a ‘mantis’ after latest US sanctions