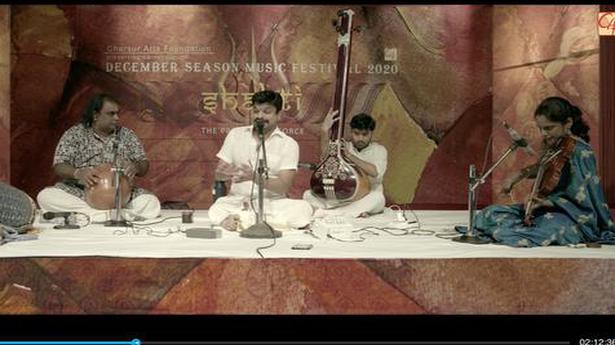 A stately Kamboji, painstakingly sculpted, dancing in all its majestic glory, is the lingering memory of Kunnakkudi Balamurali Krishna’s concert for Charsur.

One of the finest renditions of the raga heard in recent times, this hour-long exposition included a 15-minute alapana, a 10-minute violin solo by Akkarai Subhalakshmi, and a scintillating tani avartanam by veteran percussionists K.V. Prasad and Ghatam Karthick. The virtuosic Balamurali was at his best, and the artistes that accompanied him were on a roll, thoroughly enjoying the outing.

As Balamurali was slowly building his Kamboji, one could hear flashes of grand compositions throughout. With those moving phrases, the raga was in full bloom, making itself available for a leisurely rendezvous. An exposition for 15 minutes in a digital concert may sound like a luxury, but Balamurali seemed to have made a point that changing the format to digital doesn’t necessarily mean compromising on the fullness of a regular concert. The kriti he chose was ‘Ma janaki’ by Tyagaraja with niraval at ‘Raja rajavara rajeevaksha’ which was skilfully embellished by Prasad and Karthick.

If Kamboji was the showstopper, the Purvikalyani that preceded was equally arresting. Balamurali is one of those rare Carnatic musicians who is capable of employing quick-fire Hindustani-style taans and handsome glides which make a raga such as Purvikalyani a distinctly different experience. You constantly hear both a confluence as well as divergence of flavours making the raga exposition a deeply pleasing experience. His taans were magical in the Poorvi portion of the raga, that has the Hindustani colour, and the alchemy arising out of the two halves of the scale was extremely pleasing. Balamurali always sounds good with Hindustani-flavoured ragas and this was no exception. The composition he chose was ‘Kasi visalakshi’ by Muthuswami Dikshitar.

As in the case of Kamboji, this too had a leisurely alapana that lasted about 10 minutes followed by Subhalakshmi.

Balamurali began his concert with ‘Sri Rajarajeshwari’ (Dikshitar) in Poornachandrika, which was almost like a vertical take off with his chiselled gamakas and cascading swaras. This was a rendition that the whole ensemble seemed to enjoy. With such an energetic opening, they revved up enough momentum to keep the concert lively, mostly in a medium tempo, except for the closing piece in Nilambari (‘Brovavamma’ by Syama Sastri) and the ‘Paluka tenala’ (Annamayya) in Abheri that preceded it. One would generally expect Abheri to be more quick-footed, but Balamurali chose to present a different gait that seemed to have more gravitas.

The other songs that he sang were ‘Taye ini tamadam’ in Nattakurinji by Rajam Sitaram, in which his impressive bass registry was on vivid display and ‘Neemadi challaga’ by Kavi Mathrubhoothayya in Anandabhairavi. Instead of its usual plodding stride, the Anandabhairavi was a bit brisker with invigorating swaras. So, both Abheri and Anandabhairavi offered interesting departures from the usual.

The concert clearly demonstrated why Balamurali is one of the most exciting singers of the younger generation. Through the concert, his inventive and genre-defying approach, his total command over his art, cheerful voice techniques, and an impressive vocal range that lets him go up and down the octave with absolute ease were on show.

That he had accomplished musicians to accompany him on stage amplified the impact of the concert. K.V. Prasad and Karthick were stunning examples of anticipation during improvisation and playing for the lyrics. They stood out in the niraval in Kamboji by the way they kept up with the singer as he sang at will.

Being a digital concert with excellent sound quality, the tone of Karthick’s thumb-strokes as well as the way he kept accentuating punch notes were pleasing as well as invigorating. Akkarai Subhalakshmi, who has been accompanying Balamurali for years, was perfect both in her solo and accompanying roles.

A musician’s journey from a Mumbai metal band to Hollywood