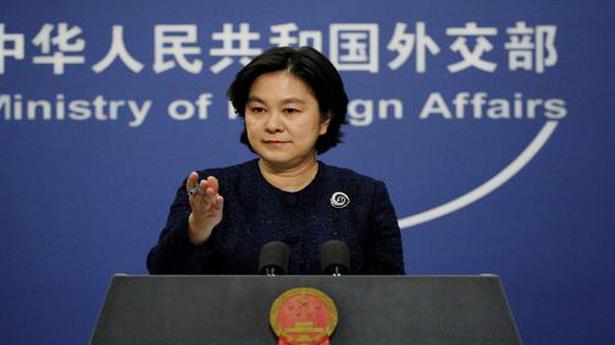 ‘The protesters in the U.S. were termed by the media as ‘mobs’, while they had called the violent protesters in Hong Kong as democratic heroes,’ says China’s Foreign Minitry

Commenting on the violence in Washington and storming of the United States Capitol, China on Thursday said it “hopes the people in the U.S. can enjoy peace” as it compared Wednesday’s events with the protests in Hong Kong.

“We believe that the people of the United States want stability and peace, and hope they can soon enjoy security and stability, especially amid the grim situation brought about by the pandemic,” China’s Foreign Ministry spokesperson Hua Chunying said.

The Foreign Ministry, as well as State media in China, compared the developments in Washington to protests in Hong Kong, where in 2019 protesters had stormed the legislative headquarters there. Ms. Hua tweeted a video of that incident on Thursday.

She said “while U.S. mainstream media denounced the protesters at the U.S. Capitol as ‘mobs’, they had called the violent protesters in Hong Kong as ‘democratic heroes’, saying that the U.S. people were standing with them”, the official Xinhua news agency quoted her as saying.

“The stark contrast in the reactions and choice of words are thought-provoking and worthy of our reflection,” she said. “What words did they use about Hong Kong? What words are they using now? The mainstream media in the U.S. are condemning the incident, calling it ‘violence,’ ‘thugs,’ ‘extremists,’ and ‘disgrace.’ What words did they use to describe Hong Kong? ‘Beautiful sight,’ or ‘fighters of democracy’.”

Similarity with the protests in Hong Kong was a common theme in China’s State media, which emphasised the violence that flared in both cases and the contrasting response from U.S. politicians, even if the difference in contexts, between protesters who were looking to overturn a fairly contested election and those who were calling for direct elections and universal suffrage to be introduced in China’s Special Administrative Region, was left unsaid.

China has hit out at past U.S. comments on Hong Kong and said it would push back against any interference. In Hong Kong on Wednesday, more than 50 pro-democracy activists were arrested in raids across the SAR, in the biggest such move since the passing of a national security law last year, following which the mass protests, which drew hundreds of thousands of mostly peaceful protesters who marched for democracy through much of 2019, have all but faded.

“Double standards are rampant,” said the Communist Party-run Global Times in an editorial. “In Hong Kong, violent actions are described as a ‘beautiful sight’, in the U.S., people involved in this chaos are called ‘mobs’.” The newspaper reported that “words like ‘karma’, ‘retribution’ and ‘deserving’ were frequently mentioned in Chinese netizens’ comments”.

The protests “had pricked the beautiful bubble of the universal values shaped by the U.S.”, Shen Yi, a professor at the School of International Relations and Public Affairs at Fudan University, told the newspaper. “The ‘beacon of democracy’ is falling down, or at least becomes gloomy,” he said. “It might be too early to declare the ‘twilight of the gods’ in the U.S., but that day is coming closer and closer.