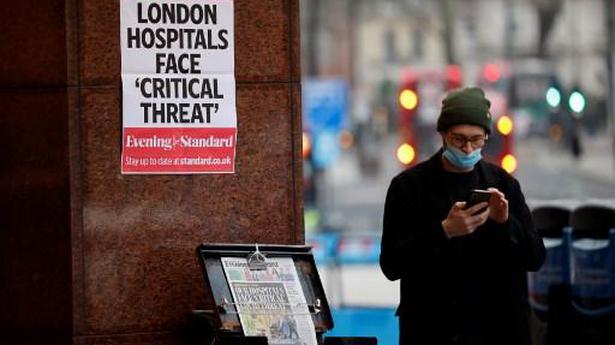 The government earlier announced that all travellers to Britain will need pre-departure coronavirus tests.

Britain on Friday reported a record 1,325 deaths over a 24 period from people testing positive for coronavirus, as a surge in cases piled pressure on overstretched health services, forcing London to declare a major incident.

The death toll eclipsed the previous worst of 1,224 recorded on April 21 during the height of the first wave last year, and brings the total number of deaths to 79,833.

The grim milestone also saw another high of 68,053 new cases registered in the past day, nudging the overall number of COVID-19 infections close to three million.

The government earlier announced that all travellers to Britain will need pre-departure coronavirus tests.

Fears are growing about fast-spreading new variants of the virus, particularly from South Africa, with concerns hospitals could be overwhelmed.

The government this week announced new stay-at-home restrictions, which include school closures, that are expected to last until at least mid-February.

In London, Mayor Sadiq Khan declared a major incident, saying the British capital was “at crisis point” and urgent action was required as beds for Covid patients could run out within weeks.

At the same time, the U.K.regulator approved U.S. firm Moderna’s Covid vaccine — the third to be authorised for use in the country’s mass inoculation programme.

Watch | All about the new coronavirus variant in Britain

Health Secretary Matt Hancock said approval for the jab was a boost to the inoculation drive, which has seen 1.5 million vaccinated since early December and aims to reach 15 million by mid-February.

“This is further great news and another weapon in our arsenal to tame this awful disease,” he said.

“Moderna’s vaccine will allow us to accelerate our vaccination programme even further once doses become available from the spring.”

U.K. health officials and ministers have described the vaccination roll-out as a head-to-head race against the virus and the vaccination programme as the best hope of a return to normality.

The government is pinning its hopes on the use of vaccines, particularly one developed by Oxford University and drugs firm AstraZeneca, to cut rising infection rates.

New strains are said to be 50% to 70% more transmissible, and have been blamed for the steep rise in cases, amid fears they may be resistant to vaccines.

But researchers at the University of Texas said on Friday that 20 people who received the Pfizer-BioNTech jab were protected against a key mutation found in both the British and South African strains.

In London, though, Mr, Khan said Covid-19 cases were now “out of control” running at more than 1,000 per 100,000 people, putting pressure on the state-run health services and emergency services.

Just over 7,000 people were in hospital in the capital in the week to Wednesday — up 27% on the previous seven days and 35% more than during the first wave peak last April.

Mr. Khan urged the public to comply with lockdown measures as “if we do not take immediate action now, our NHS could be overwhelmed and more people will die”.

But it has argued the requirement to quarantine on arrival from high-risk countries was a more effective measure.

From next week travellers to England from abroad, including British nationals, must present a negative test taken within the last 72 hours or risk a fine.

U.K. Transport Secretary Grant Shapps told Sky News he expected the rule would “be a U.K.-wide requirement some time next week”.

Scotland, Wales and Northern Ireland, which all set their own health and transport policies, backed the move.

“We’re doing this now because there are these variants that we are very keen to keep out of the country like the South African variant,” he added, saying it made testing “much more urgent”.

Direct travel from South Africa to Britain has been suspended temporarily.

International travellers to the U.K. from countries not on an approved list of “safe” countries will have to quarantine for 10 days as well as provide a COVID-19 test.

John Holland-Kaye, the chief executive of Britain’s largest airport, Heathrow, told BBC radio this was a “belt and braces approach” and “very few people will travel with this in place”.