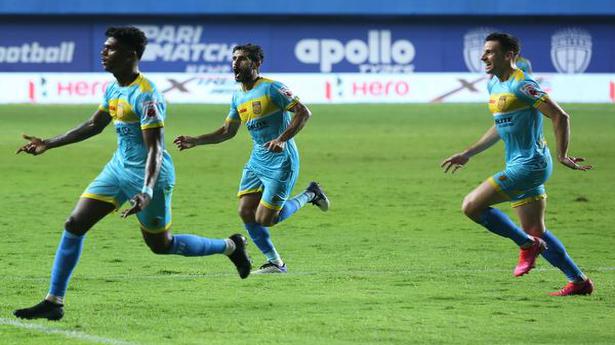 Liston Colaco’s lightning pace and terrific brace powered Hyderabad FC to a 4-2 win over NorthEast United FC in the Indian Super League at the Tilak Maidan Stadium, Vasco, on Friday.

HFC got off to a flying start, breaking the deadlock in the third minute. Joel Chianese stormed down the right, cut in through two defenders and passed to Aridane Santana, who made no mistake. It was Santana’s sixth goal of the season.

Chianese himself struck in the 36th minute when he latched on to Akash Mishra’s pass on the left, got past four defenders and slotted home.

However, HFC’s joy was shortlived as NEUFC scored twice in the dying minutes of the first half. In the 45th minute, Ashutosh Mehta won a penalty which was coolly converted by captain Federico Gallego.

A couple of minutes later, it was Benjamin Lambot who netted the equaliser after five NEUFC players, unchallenged, tried to knock the ball over the line.

Colaco came off the bench in the 64th minute to turn things around for HFC. The 22-year-old’s first strike came in the 85th minute. With a sprightly run, Liston took on three defenders before unleashing a curling left-footer. The Goan scored his second goal in stoppage time to round off a thumping victory for his side.

Interestingly, all of Liston’s four goals in the ISL have come against NEUFC.

Austria shuts schools, most stores, to curb spread of coronavirus