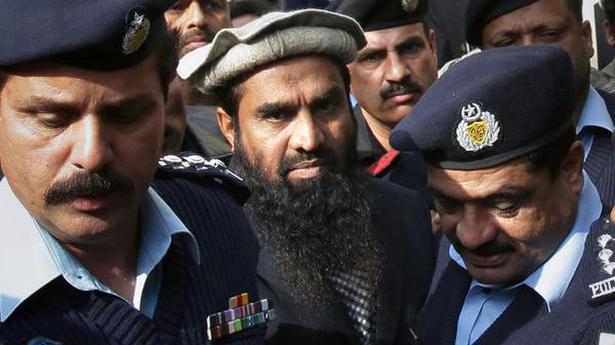 Lakhvi pleaded before the court that he was “falsely implicated” in this case.

Mumbai attack mastermind and Lashkar-e-Taiba operations commander Zaki-ur-Rahman Lakhvi was sentenced to 5 years in jail on Friday by a Pakistani anti-terrorism court in Lahore in a terror financing case, amidst mounting international pressure on Islamabad to bring to justice terrorists roaming free in the country.

Anti-Terrorism Court Lahore judge Ejaz Ahmad Buttar sentenced the UN proscribed terrorist to five years of rigorous imprisonment each on three counts with a fine of PKR 1,00,000 (approximately $620). His punishment will run concurrently.

“The Anti-Terrorism Court (ATC) Lahore convicted Lakhvi for commission of offences of terrorism financing in a case registered by the Counter-Terrorism Department (CTD) for 15 years under different sections of the Anti-Terrorism Act 1997,” a court official told PTI after the hearing.

“In default of payment of fine, he will have to undergo an imprisonment of six months each on three counts. He has been sent to prison to serve the sentences,” the official said.

Lakhvi, 61, pleaded before the court that he had been “falsely implicated”.

Editorial | Black and grey: On Pakistan’s actions against terrorists

He was accused of running a dispensary and using funds collected for terrorism financing.

“He and others also collected funds from the dispensary and used the funds for further terrorism financing. He also used these funds for personal expenses,” the CTD said.

The Anti-Terrorism Court also directed law enforcement agencies to arrest the co-accused in the case, Abu Anas Mohsin, due to the availability of sufficient evidence against him.

The U.S. had welcomed Lakhvi’s arrest last week but said Pakistan should try him for the Mumbai attacks also.

“We welcome Pakistan’s arrest of terrorist leader Zaki-ur-Rehman Lakhvi as an important step in holding him responsible for his role in supporting terrorism and its financing,” the South and Central Asia Bureau of the State Department said in a tweet. “We will follow his prosecution and sentencing closely and urge that he be held accountable for his involvement in the Mumbai attacks,” it said on Tuesday.

Interestingly, Lakhvi was presented before the Lahore ATC on Friday and was convicted the same day in the terror financing case registered against him some time ago. The court was told that Lakhvi, a resident of Renal Khurd Okara district of Punjab, was living in Islamabad before his arrest in the case.

Lakhvi, who was on bail since 2015 in the Mumbai attacks case, was arrested by the Counter-Terrorism Department (CTD) of Punjab province on Saturday. He was designated a global terrorist by the UN in December 2008 for being associated with LeT and al-Qaida and for “participating in the financing, planning, facilitating, preparing or perpetrating of acts by, in conjunction with, under the name of, on behalf or in support of” both the entities.

The permission was granted 10 days before his arrest. Lakhvi named his son Hafizur Rehman and brother Saadat Bashir Waheed, who would send him PKR 90,000 and PKR 60,000 respectively in his bank account. He said that his son and brother both had accounts in the same branch.

The global terror financing watchdog FATF is instrumental in pushing Pakistan to take measures against terrorists roaming freely in and using its territory to carry out attacks on India and elsewhere. The Paris-based FATF placed Pakistan on the Grey List in June 2018 and asked Islamabad to implement a plan of action to curb money laundering and terror financing by the end of 2019 but the deadline was extended due to COVID-19 pandemic.

On Thursday, an anti-terrorism court in Gujranwala issued an arrest warrant for banned Jaish-e-Mohammad chief Masood Azhar on the charges of terror financing. The court issued the warrant against Azhar during a hearing in a terror financing case instituted by the CTD of the Punjab police against some members of the JeM.

The LeT, led by Jamat-ud-Dawa (JuD) chief Hafiz Saeed, is responsible for carrying out the 2008 Mumbai attacks that killed 166 people, including six Americans. The UN named Saeed a Specially Designated Global Terrorist, and the U.S., since 2012, has offered a $10 million reward for information that brings Saeed to justice.