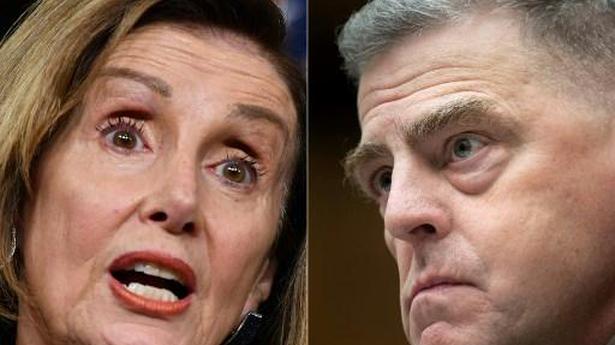 U.S. House Speaker Nancy Pelosi said on Friday she spoke with the nation’s top military leader about ensuring that “unstable” President Donald Trump does not launch a nuclear attack in his final days in office.

The top Democrat in Congress said she talked with Joint Chiefs Chairman Mark Milley “to discuss available precautions for preventing an unstable President from initiating military hostilities or accessing the launch codes and ordering a nuclear strike.”

In her letter to Democratic colleagues, Ms, Pelosi also said she is prepared to launch impeachment proceedings against Mr. Trump if he does not voluntarily resign or if Vice President Mike Pence does not begin a process that allows him and the cabinet to remove the President.

Also read: A day after violence, Trump says he will focus on ‘smooth, orderly, seamless’ transition

“If the President does not leave office imminently and willingly, the Congress will proceed with our action,” she said.

Trix vs. the Bangtan Boys

Australia vs India, 2nd Test | India close in on victory as Australia leave...