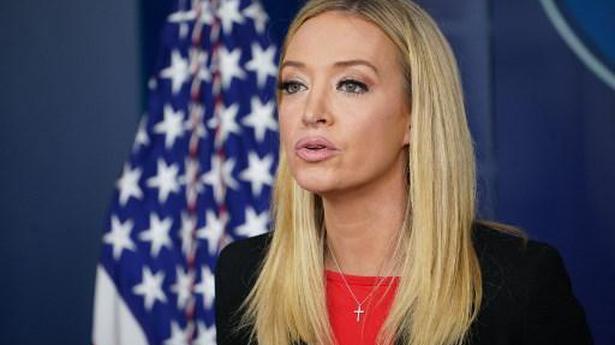 Ms. McEnany, said that the White House was committed to the “orderly transition of power”

White House Press Secretary Kayleigh McEnany says President Donald Trump’s administration found the siege of the U.S. Capitol to be “appalling, reprehensible and antithetical to the American way.” But while Ms. McEnany’s statement to the press Thursday broke the White House’s silence a day after the violence, Mr. Trump himself remained quiet.

Ms. McEnany, for the first time, said that the White House was committed to the “orderly transition of power” to President-elect Joe Biden’s incoming administration. She also took pains to try to draw a distinction between the “violent rioters” and other Trump supporters who attended the President’s rally in Washington just before the siege of the Capitol.

Also read: ‘I really don’t know why she decided to do this’: Mother-in-law of the woman shot dead in U.S. Capitol

But Ms. McEnany took no questions. And the impact of the statement would likely be muted, as Mr. Trump has long said that only he speaks for his White House.

The President has yet to condemn the violence that was meant to stop the congressional certification of Mr Biden’s victory. The head of the union representing U.S. Capitol Police is calling on the department’s chief to resign, saying the Capitol riot “should never have happened.”

Gus Papathanasiou said in a statement Thursday that a lack of planning led to officers exposed to violent protesters storming the Capitol. He says officers lacked the backup and equipment needed to control rioters and argues that Capitol Police Chief Steven Sund must be replaced to prevent similar incidents in the future.

Neetu Chandra on making her Hollywood debut in ‘Never Back Down: Revolt’