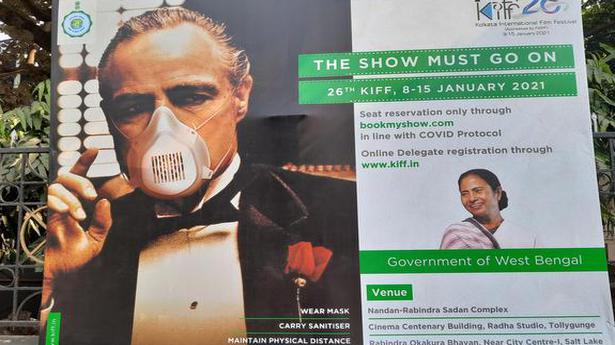 Legendary filmmaker Satyajit Ray’s classic ‘Apur Sansar’ will be the inaugural film of the festival in which 131 movies from 45 countries will be screened till January 13.

Banerjee, while delivering her inaugural address from state secretariat Nabanna, asked the cinema hall owners to maintain all safety protocols including regular sanitisation of the theatres.

She asked Chief Secretary Alapan Bandopadhyay to issue a notification raising the occupancy limit of theatres from 50 to 100 per cent.

The occupancy limit was restricted to ensure physical distancing inside the theatres.

Citing lesser revenues since the reopening of theatres in October last year and no known instance of the spread of COVID-19 through cinema halls, the theatre owners had recently written a letter to the chief minister requesting her to allow full occupancy of the establishments.

Banerjee said apart from issuing e-passes for seeing films in state-run auditoriums in Nandan-Rabindra Sadan and Rabindra Okakura Bhavan, organisers should spare some thought for people who are not well-versed with technology and suggested if some films could be screened at the open-air theatre in Nandan.

Despite the pandemic situation, the West Bengal government has hosted the 26th KIFF on a smaller scale at a time when many organisers of other film festivals have cancelled their events, she said.

Banerjee paid tributes to legendary actor Soumitra Chatterjee, who died due to post-COVID complications last year, and other luminaries and said a section will be dedicated to their works.

Noting that the Bengali film industry, popularly known as Tollywood, has one of the best talents in the world, Banerjee said, “One day we will beat Bollywood, Hollywood to occupy the number one position in the world.” “We had West Bengal’s pride Uttam Kumar, Soumitra Chatterjee and Suchitra Sen in the past, and presently have Madhabi Mukherjee and Sabitri Chatterjee among others,” she said.

She invited Khan to visit the state during Raksha Bandhan and next year’s KIFF, to which he replied in affirmative.

The actor has been attending the film festival since 2011 but could not visit Kolkata this year due to the pandemic situation.

A short film with snippets from different movies of Soumitra Chatterjee and his stage production on King Leer with his voice-over was screened at the programme.

All the attendees wore masks and maintained social distancing.

Ajitpal Singh’s ‘Fire in the Mountains’: Clash of beliefs

TMC takes on Bagan in final