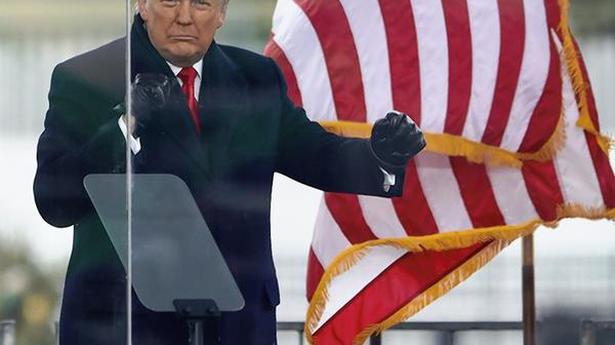 After the Capitol riot, there is a fresh effort by Democrats to remove the President from office. But is it easy?

The story so far: There is a huge clamour for the removal of U.S. President Donald Trump before January 20, when Joe Biden will be sworn in as the 46th U.S. President. Democrats have launched a fresh drive to remove Mr. Trump from office after he incited his Republican supporters to storm the U.S. Capitol, the seat of political power. Two avenues have been suggested for this: the exercise of the 25th Amendment of the Constitution or impeachment. On Friday, House Speaker Nancy Pelosi was quoted by agencies as saying that she had instructed the House Rules Committee to move ahead with a motion for impeachment and the legislation on the 25th Amendment, if Mr. Trump did not resign. But it is easier said than done.

What does the Amendment say?

Section 4 of the 25th Amendment allows for the immediate removal of the President “whenever the Vice-President and a majority of either the principal officers of the executive departments or of such other body as Congress may by law provide, transmit to the President pro tempore of the Senate and the Speaker of the House of Representatives their written declaration that the President is unable to discharge the powers and duties of his office.” When that happens, the “Vice President shall immediately assume the powers and duties of the office as Acting President.”

Explained | How Trump could be impeached again, but faster

However, Vice-President Mike Pence seems to have no desire to take that step. For exercising the 25th amendment, therefore, Congress has to set up a special commission to determine that the President is unable to discharge his duties. Since such a step has never been taken before, Congress will enter a new field altogether. It will not only have to decide on the composition of the special commission, but will also have to set up the modalities for making such a determination. In addition, it will be difficult to convene the Senate to take up the issue of this special commission. The Senate will not reconvene for any substantive business till January 19. Although it will hold two pro forma sessions next week — on January 12 and January 15 — it is barred from conducting any kind of business during those days without agreement from all the 100 senators. The presence of Mr. Trump’s allies in the Senate makes that highly unlikely.

Further, even if the Cabinet decides on the competency of Mr. Trump, he can resume his powers and duties by mere transmission to the two Houses his written declaration that no inability exists. He can also fire the principal officers who supported the initial declaration. Of course, the majority of the Cabinet, as it exists, or the special committee can again transmit to the house another fresh declaration that the President is unable to discharge his powers and duties, for the Vice-President to again assume the powers and duties of the President. For him to continue, however, it has to be sustained by a two-thirds majority of both the Houses. All in all, the removal of Mr. Trump from the presidency through the 25th Amendment before January 20 is highly improbable, if not impossible.

Therefore, no substantive action can be taken to remove Mr. Trump from office before January 20. A copy of draft articles of impeachment circulating among members of Congress charged Mr. Trump with “inciting violence against the government of the United States” in an attempt to overturn his election loss to Mr. Biden, Reuters reported.

Senate Republican Leader Mitch McConnell sent a memo to Republican senators detailing a possible timetable for an impeachment trial. He noted the Senate will hold its next work session on January 19 and needs the consent of all the 100 senators to convene sooner, meaning a trial would not begin until Mr. Trump was out of office, a source familiar with the document said.

What happens after he leaves office?

Mr. Trump could still be impeached after he leaves office. Most constitutional lawyers agree that an ex-President can be impeached, which would have the effect of preventing him from running for the presidency again. Irrespective of one’s views on Mr. Trump’s character, he will continue to be the President till the noon of January 20.

“Impeaching President Donald Trump with 12 days remaining in his presidency would only serve to further divide the country,” White House spokesman Judd Deere told the media on Friday.

Dr. Balachandran is a policy commentator and a former Development Correspondent of The Hindu

Urvashi: ‘Importance given to women by the society reflects in our films’

Apple’s hardware engineering chief to step down to focus on new...

Qualcomm to supply General Motors with ‘cockpit’ chips for next generation...