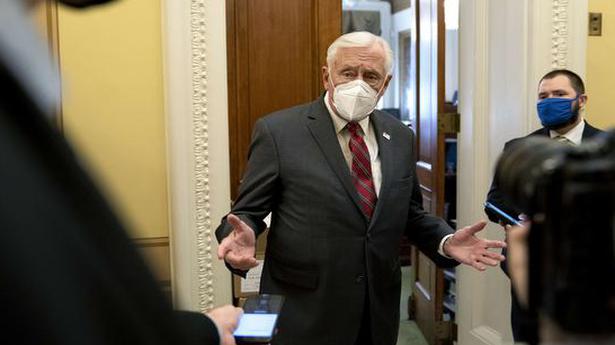 Two Senate Republicans — Lisa Murkowski and Pat Toomey — have asked Mr Trump to resign because of the insurrection.

Democrats in the House of Republicans introduced an article of impeachment against U.S. President Donald Trump — the “incitement of insurrection” for his role in the attack on the Capitol last Wednesday. The House could vote on this charge on Wednesday.

House Republicans blocked a measure on asking Vice President Mike Pence to invoke the 25th Amendment, a statute by which the President can be removed on grounds of incapacitation. The measure will go to the full House floor for a vote.

Also read: Explained: How Trump could be impeached again, but faster

On Sunday evening, House of Representatives Speaker Nancy Pelosi articulated a plan to go ahead with the impeachment of Mr Trump if Vice President Mike Pence did not invoke the 25th Amendment.

“In protecting our Constitution and our Democracy, we will act with urgency, because this President represents an imminent threat to both. As the days go by, the horror of the ongoing assault on our democracy perpetrated by this President is intensified and so is the immediate need for action,” Ms Pelosi wrote in a letter to her fellow House Democrats.

There are ten days left in Mr Trump’s term and if impeached he will the first President to be impeached twice. If convicted in the Senate, Mr Trump could be barred from running for office again in the future.

Monday’s resolution was introduced by Rhode Island Congressman David Cicilline, Maryland’s Jamie Raskin and California’s Ted Lieu. At least 210 of 222 House Democrats have signed on to this, as per the New York Times.

While it is theoretically possible for the impeachment articles to be sent to the Senate in days — where Mr Trump will be tried this is unlikely to happen. The new administration and Congress will need to focus on a COVID-19 response and cabinet appointments and House Democrats may delay sending the charges to the Senate, where the trial has to begin immediately. Democratic Whip James E. Clyburn of South Carolina told CNN that House Democrats might not send the articles to the Senate until after 100 days of the Biden administration.

Two Senate Republicans — Lisa Murkowski and Pat Toomey — have asked Mr Trump to resign because of the insurrection.

Trump lashes out at GOP after override vote on defense Bill

As interests realign, a third major political party could emerge in the U.S., says...